When at First You Don't Succeed 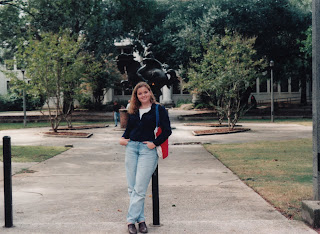 When I was young, and idealistic, and thought the job I wanted would be there waiting for me the moment I graduated (complete with welcome banner and funfetti), I decided I wanted to be a Marine Scientist. I couldn’t have been more thrilled when I received a scholarship to attend the University of South Carolina.

All fresh-faced and shiny, I showed up on my first day of college ready to take on the world. I was young, idealistic, and thought that a degree in Marine Science would take me places. Literally. Me, a research ship, a wetsuit and a pod of frisky dolphins—you get the picture. Just call me Erin Cousteau.

With my shiny new backpack and a sturdy pair of new shoes, I huffed it to the quad to attend my very first class on my very first day of my very first semester of college ever. It began at 8am, but despite the trouble I had getting to sleep the night before (excitement, you know) I was all chipper and ready to begin the next chapter of my life.

Unfortunately, the next chapter began with Calculus. Calculus! What that heck kind of a way is that to welcome a newbie? As I slipped into the huge auditorium, I chose a middle distance seat and slid in, pencil sharpened (that’s right kids – no laptops!), notebook open, and the $150 calculator I had to purchase in high school perched on the corner of the desk. The class began, and within moments I had a bit of a sinking feeling. Now, I don’t know a lot about math, but I was prreeettty sure it involved numbers. Not x’s, y’s, z’s, and quirky, oversized, angry-looking backward 3’s (You know—this guy: ∑. What the heck is that thing, anyway?).

The biggest shock of all, however, was that we were not allowed to use our calculators. Gulp. Didn’t she know that my precal class in high school required calculators?? This is the fun part: that wasn’t a university wide edict. Oh no, my friend in the other calculus 101 class happily tapped away on his calculator.

As I navigated my way through the week, I was relieved to see that I had saved the worst for first. That was the good news. The bad news was that I had that stupid calculus three days a week – all at the crack of dawn in the eyes of a college student . . . ok, who am I kidding? 8am is still the crack of dawn for me ;)

What was even worse than the content of the class was the professor herself. She sounded like Barbara Streisand, looked like John Lennon – slap a pair of round glasses on her and she’d be set—and had all the charisma of Ben Stein (Bueller? Bueller?). A couple of weeks into the semester, I was walking to class with some friends and was letting them in on my observations. I got a good laugh out of everyone, and when the giggling subsided, I realized that there was a sound coming from behind us. Click clap click clap . . . Someone was walking directly behind us. With heels. On a college campus. Holding my breath, I peeked behind us. Oh schnikies – it was the White Album all over again.

Talk about egg on the face.

Nothing like openly mocking the professor of your weakest subject. By halfway through the first semester, I had come to the conclusion that I had mistakenly placed into Calculus, while some Mensa member languished in precal. There was no way around it: I needed help. Swallowing my pride, I went to professor Barbara S. Lennonstein, tail tucked between my legs, and asked for help. She sat behind her desk, steepling her fingers and smiling blandly. Have no fears, she said, you’ll do fine.

I muddled through the rest of the semester, all the while terrified I’d end up with a grade I had never even seen before. Would it be a C-? Dear lord, a D? Or, horror of horrors, D-??? The mere thought made me break out in a cold sweat. It couldn’t be. It would be okay. I would get a (cringe) C, and somehow life would go on.

At the end of the semester, I headed home for the holidays, finished with classes and anxiously awaiting the grades that were due to be released within the week. Come Christmas, I was wrapped in the bosom of my family, the tree glittering merrily as the smell of baking cookies filled the air. With Christmas music tinkling in the background and a fire crackling beside the desk, I sat down to call for my grades. (Yes kids, in the old days, you had to call an automated phone center to receive your grades. The computer system wouldn’t come into use for that particular task for another two years.)

As if sensing my anxiety, the system was busy the first time I called. And the second. And the third. By the tenth redial, I was a jittery mess. It was suddenly the most important thing in the world that I know my grades, and the phone lines were conspiring against me. When at long last the stupid system picked up, I pressed each button with utmost care, terrified I would do something wrong and be disconnected.

First my social, then my password, and finally the mechanical voice began to read. Each word is slow and precise, and it seems to take years to read through the list. With pencil in hand, I copy the words on paper:

(longest pause in the history of mankind)

I sat in shock, staring blankly at the foreign symbol I had written on the page. What was this tall vertical line adorned by two, short, horizontal ones? Had someone deconstructed a B? Alas, they did not. No, my dear cake readers, it was indeed my very first—and only—

That, my friends, was the most monumental failure of my entire academic career. It haunted me for the whole of my four years in college, since my school did not have freshman forgiveness despite the fact I earned a B when I retook the class under a different professor. I was shocked, embarrassed, humbled, and disappointed.

This, my friend, is not a story of failure, but rather the motivation failure offers if we choose to view it that way. I worked with single-minded purpose after that, determined to never repeat such a disaster. After that semester, I enjoyed four semesters on the Dean’s list (all A’s and B’s), and my final two semesters even made the President’s list, despite including such classes as Physics, Organic Chemistry, and Master’s level classes. In the end, I graduated with honors, in spite of the fact I had a four-credit F hanging like a 50 lb weight from my GPA. It was a triumph, and a lesson that I have always carried with me.

In writing, it is difficult to ride the roller coaster of the business. Agents rejections, contest wins, contest losses, scathing feedback, sweet praises, long silences from agents and editors . . . the list goes on. But guess what? I plan to keep pushing. I want to learn from every rejection, to absorb the good advice while repelling the bad. I want to soldier on, and in the end, I want to be a success. I can visualize it, I can work towards it, and I can believe in it.

What have been some failures that led to your own successes? Has there been a recent setback in your life? A triumph? Did you suffer through calculus with me and get an F too but also went on to overcome it? (I’m talking to you, Jacob!) 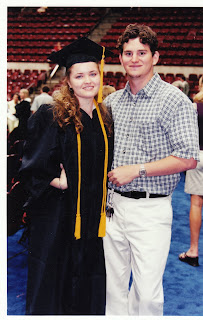 All this month, I will be ending my blog with something I am thankful for. This month, I am grateful that my dog is too cute to kill, especially when she decides to do a little redecorating . . . 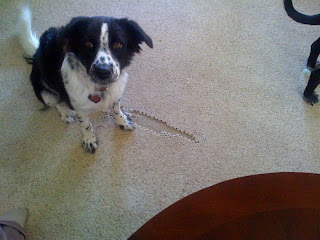 No matter how great the success your failure may eventually lead to, you are always entitled to a little chocolate wallowing initially :)

I found these cookies on Oprah.com, a recipe submitted by Nigella Lawson, and try as I may, I can’t seem to improve on them :) If you are looking for all the best things combined in one cookie—shortbread, chocolate, icing, and sprinkles!—then I recommend giving them a whirl!