As seen on LadyScribes today

So, some of you may have heard earlier this week that the earth tilted on its axis. Although I am a scientist by training, I will do my best to explain the root cause for this rather unexpected phenomenon in a way that any layman can understand.
You see, it all started with a Facebook post. Observe, Exhibit A:
“That moment, when you suddenly realize that Ralph Macchio is now the same age as Mr. Miyagi in The Karate Kid.”

I’ll pause here for those of you who are hearing this bit of news for the first time.
*Folds hands and waits patiently*
*discretely hands over a box of Kleenex*
Better now? No? Well, ME NEITHER!! What in the name of all that's sacred in this world is going on? Surely we have just stumbled upon some sort of freak tear in the time/space continuum, which has caused this wholly premature turn of events. Surely, SURELY the kid who stole no less than half the hearts of Gen-Xers (the other half belonging to men) is not older than Steve Carell is now, or worse, older than Rue MeClanahan was when she first appeared on Golden Girls. THE GOLDEN GIRLS!

I gotta be honest—I'm not handling this well. It's not that I think 51 is old—50's are the new 30's!—it's just that I can't possibly reconcile the fact that so much time has elapsed since he was going all flamingo-like on the bow of the boat, or resentfully waxing-on, waxing-off the lot full of old cars in Mr. Miyogi's backyard.
You know, it's like that moment when you realize your friend's kid is old enough to drive, or your nephew is now tall enough to look down on you when you're standing side by side. Time, it just keeps marching on, does it not?
So, after the earth tilted and we all scrambled to reorient ourselves in a world where Mr. Miyagi is about to be Daniel-san's junior, I sat back and consoled myself with these three things:
1) The movie will always transport me back in time when I need a hit of nostalgia
2) My present is pretty darn awesome. I'm happy with the way I filled the intervening years
3) Ralph Macchio is still pretty darn adorable

Now, should any of these fail to be true sometime in the future, I'm sure you'll hear from me again. Fair warning ;)

So tell me, who was your teen heartthrob? Did you ever have a moment when you realized he wasn't the young hunk you one fell in love with?
Now, I leave you with these wise, wise words:
Man who catch fly with chopstick accomplish anything.
*nods sagely* 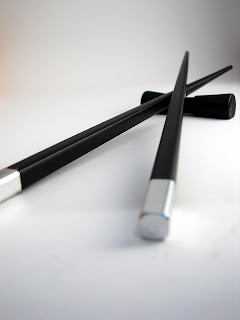