**As seen on LadyScribes today**

Ahhh – the internet.  That great nameless, faceless void in the sky that simultaneously keeps us all connected while keeping us apart.  It is almost impossible to assimilate the fact that children born in the last decade have never known a world without this sort of technology.
And really, not just the internet. Cell phones have completely revolutionized the world as we know it. In many, many senses, that is a great thing. No more being stranded on the side of the road, hoping a stranger will stop and help. No more wondering if you need to buy milk, or if there is already some at the house. No more angst about whether a loved one is alright when they are a bit late. For this worrywart, those are all good things.
But in my opinion, we will never again have a true notion of solitude. We are connected to the rest of the world in a way that goes beyond a healthy relationship, into the obsessive, all up in each other’s business sort of way, where you are never alone.  People can’t even end a conversation before going to the bathroom! (Oh, don’t get me started on that). I think the result is, we have forgotten how to be alone. How to be quite, and still, and patient.
With our smartphones in our hands, we have the internet, games, messaging, email—enough instant entertainment to keep a person occupied for decades.  Do we even remember the days when waiting in the doctor’s office meant exactly that—waiting? Or when we left the house, and we wouldn’t know who called until later that evening, when the red light was blinking on the answering machine?
When I think of life before cell phones, I think of the bliss of living in the moment. Multi-tasking was rubbing your belly while patting your head (which actually works out better than juggling emails, writing, and all the other tasks we try to cram into the same moment in time), and messaging was sitting down to write a letter using pen, paper, and *gasp* cursive.  There was no glow of electronic screens constantly bathing my face, no pings and beeps and wooshing punctuating the day.
Yes, I was young and with less responsibilities, but I know life was slower for everyone back then. And quieter. And less chaotic.  I realized recently that my cell phone is almost never out of my sight. Ever. It’s the last thing I look at before I go to bed, the first thing when I wake up, and my constant companion as I navigate the 50 million tasks of the day.
And you know what? I don’t like that anymore.  I’ve decided that I want to be out of contact a bit. I want to walk away from that siren device, cutting the invisible string that ties us.  I want to be unavailable for a few hours, and out of touch on occasion.
I want to remember what solitude feels like. Not loneliness—just privacy. Holding a few things to myself instead of sharing so much on a constant basis. I want to have something to talk about with friends when I see them that they haven’t already read on my Facebook page or on Twitter.  I miss sharing good news in person—don’t you?
So, for a little while, I’m going to try to take a step back. I’m going to leave my cell phone on the kitchen hours and walk away when I’m in the house. I’m going to turn off the notifications, choosing instead to check on things in my own time.
Who knows—maybe I’ll relearn what it feels like to not instantly know what tomorrow’s weather is, or when Genghis Khan roamed, or how many movies Clint Eastwood has directed. Crazy, huh?

So tell me—how attached are you to your cell phone? Are you ever more than a stones’ throw from it? Do you remember what it was like before they were invented?  I’ll warn you in advance that I’m working the day job today during the Christmas rush, so I won’t get back here until this evening. Fitting, no? ;)
Posted by Erin Knightley at 12:00 AM 3 comments:

Learning to be Gracious

This weekend, I had the honor of signing beside Nora Roberts at her husband’s book store in Boonsboro, Maryland – Turn the Page. In all, there were about eight authors present for a signing that was meant to be from noon to 2pm. I say ‘meant’ because we stayed until after 4:30, when the last person waiting in line finally got her books signed and left.

For me, an author who is still learning the ropes, I couldn’t ask for a better role model than Nora.  Even though she was feeling under the weather, she was there early, dressed to the nines and looking fabulous. She sat there for the entire 4 and a half hours, only getting up once for a very short break.  She smiled at each and every fan, patiently signed their stacks of books, and posed with a bright smile with absolutely everyone who asked.
Y’all, Nora is a super star. She definitely didn’t have to do the signing. Yes, it was wonderful for her family’s business, but truly she could never write another book again and still enjoy a successful career. But she did it because she seems to genuinely love and respect her fans. It’s that respect that made an impression. 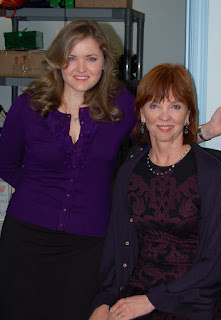 And Nora isn’t the only example of graciousness in my business. There is Sabrina Jeffries, who always makes time for fans and fellow authors alike. Even before we became friends, she was happy to offer up her knowledge of the business to us newbies in hopes of helping her fellow writer get ahead. She is incredibly busy, yet she took the time to write a cover quote for me. That’s a big deal, and it is a kindness I will never forget.
There is also another author, who shall remain nameless (since I don’t want her inundated with requests!) who went way above and beyond for me. My friend was turning 40, and this author was her very favorite. When I appealed to her for a signed book for her birthday, offering to send the book or money, the author instead sent a big package including several signed books for my friend, an actual birthday card, and even a few signed books for me! I mean, how incredibly generous and awesome is that?
I’m so blessed to have these incredible women as role models. It is my hope to emulate them in their graciousness, kindness, and even their work ethic. I hope to always give my readers a warm fuzzy so they know just how important they are to me. I am grateful for each and every one of you! Just as a reminder, I am always happy to send a free signed bookmark and swag to my fans – just email a request to erin@erinknightley.com.
And if you, as a reader, ever want to give back to your favorite authors, I hope that you will take a moment to post a nice review or tell your friends about them. Spreading the word is the very best thing you can do for the authors you love :-)

So tell me—who has been a role model to you (no matter what you do in life)? A teacher? A parent? A fellow coworker?
Posted by Erin Knightley at 2:10 PM 1 comment:

A Taste for Scandal... and Chocolate Puffs!

As seen on Lady Scribes today 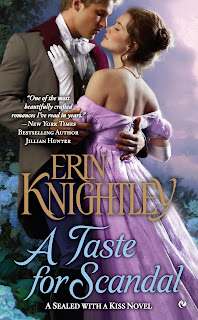 Psst. Hey you.
Yes, you—the one staring at the computer screen.  Do you know what today is?

It’s Release Day for A TASTE FOR SCANDAL!

And as thrilled as I am to have my 2nd book finally available,  I am determined to celebrate in as genteel a fashion as possible. You see, in the six months since my debut, I have matured leaps and bounds as an author, in more ways than one.  I mean, you’ll no longer find me running through the aisles of a certain large bookstore, dancing like a fool.

Oh no, this time around, I shall be all that is graceful and refined.

With that in mind, I have created a little video for your viewing pleasure. In it, I’ll show you a super quick and oh-so easy recipe that I found while researching late eighteenth and early nineteenth century cookbooks.

This particular recipe happens to be special, since it is the very first one that my baker heroine teaches her rakish earl hero. (PS – I didn’t set out to write a Regency foodie romance, but somehow that’s exactly what happened!)

So, from the Duchess of Delight, Her Grace Erin Knightley (who steadfastly promises not to make a cake of herself), I hope you enjoy:


(Okay, so maybe I make a bit of a cake of myself after all, lol)