The Anatomy of a Revision

Start with a first draft. Recognize that it has certain potential, but a complete lack of "Wow" factor: 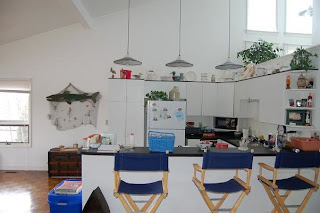 Do your best to dress it up, adding small touches of beauty here and there: 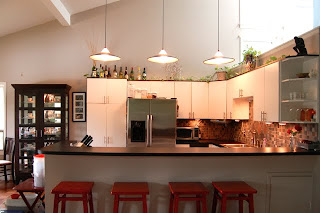 Come to terms with the fact that you've done naught but scratch the surface of what needs to be done. Roll up sleeves and begin taking things apart: 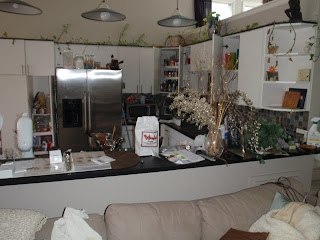 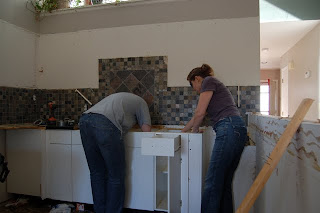 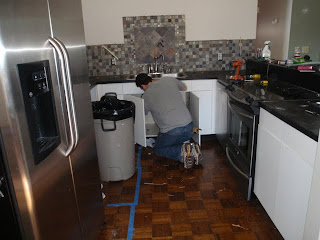 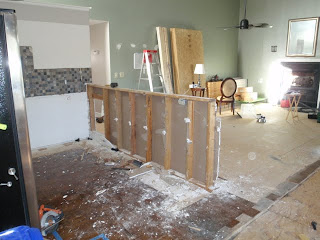 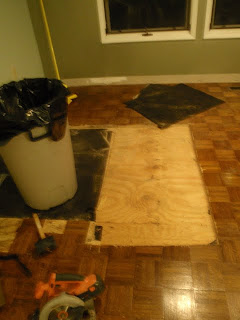 Finally, get to the bare bones, that place where all the bad has been purged: 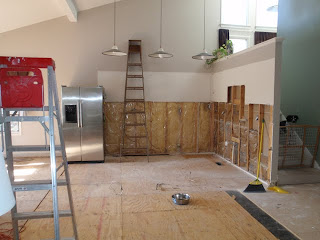 Pause for a victory dance. Ignore the dust as it settles around you: 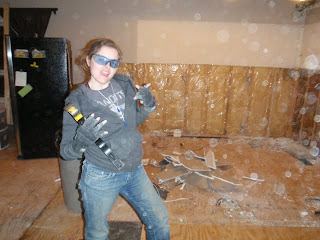 It's time to rebuild! Start with the foundational basics: 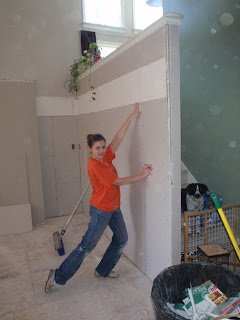 Polish, polish, polish: Everything must be smoothed out at this stage, otherwise imperfections will be apparent in the finished product: 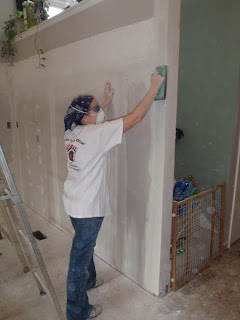 Finally, the layer of beauty necessary for both beauty and utility can be laid: 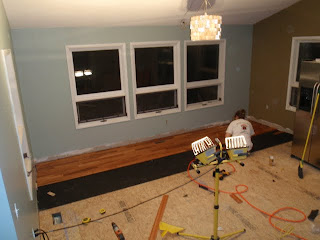 Work, work, and more tedious work must be diligently attended to in order to reach the final product, no matter how grueling, painful, or exhausting. Then, and only then will the revisions be successful, and your final, flawless product can be revealed: 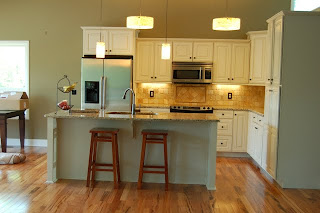 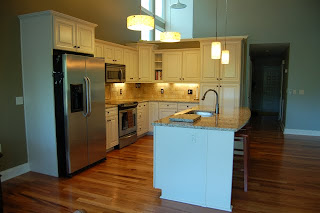 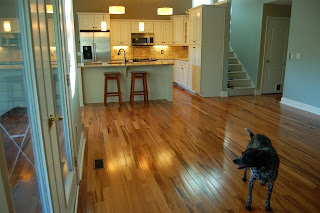 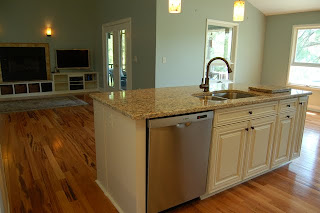 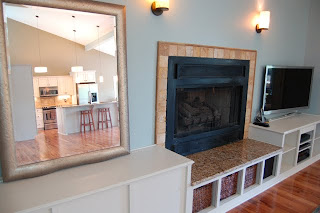 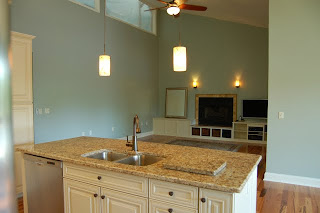 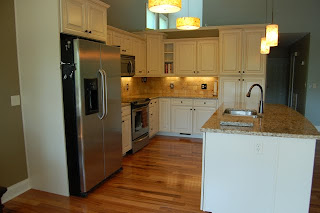 Hip, hip, hooray!! When all is said and done, the pain of the labor will begin to fade, and your final, revised product will be there for all to enjoy :)

So tell me - how does this compare to your revision process? Do you ever feel like you've bitten off an impossibly big chunk, only to find that you can handle it if you take it one day at a time? Thanks so much for stopping by - I am SOOOOO glad to have my kitchen back, and inaugurated it with cookies last night :) Recipes shall start again soon!

Note: I am grieving the loss of my last 2 months of cell phone pictures :( Stupid, stupid pieces of . . . electronics. Anyway, many of the 'during' shots were lost, such as the tile and trim work, as well as the hard work Kirk put into building that gorgeous entertainment center on the back wall of the living room. Well, I guess things could always be worse, now couldn't they . . .
Posted by Erin Knightley at 1:22 AM 27 comments:

Last week, I went to my very first RT Booklover convention, which quite spectacularly melded the worlds of readers and writers alike for five blissful, fantasy filled days. The conference offered workshops, meet and greets, book signings, mixers, and even two full-blown balls.

Now, as a Regency era writer, for the most part I lived vicariously through the fun and outrageous fairy costumes, vampire drag, and even the gloriously quirky fashion sense of steampunk lovers.

Throughout the conference, I met readers, writers, editors, agents, photographers, artisans, vampires, fairies, harem girls, a few male cover models, and one werewolf. But it wasn’t until the last night of the conference that I saw him: the man of my Regency dreams.

It was late Friday night, and I was sandwiched between friends at the bar in the open mezzanine of the hotel lobby. It was late, and above us, the Vampire Ball was starting to die down, with the occasional gothic attendee disembarking the escalator and sidling up to the bar.

With a yawn—it was three o’clock in the morning to my eastern standard time internal clock, after all—I glanced around. Movement on the balcony above caught my eye, and I glanced up in time to catch a man stroll up to the railing and pause for just long enough to make me gasp. It was like my own Mr. Darcy, come to life.

Clad in a sleek evening coat with tails, his buff breeches tucked into a pair of black, shiny top boots, he casually observed the lobby below like a lord taking stock of his servants. In those few moments, he positively exuded confidence and debonairness.

Unable to speak, I urgently smacked the friend beside me and pointed, but seconds later Mr. Darcy stepped back and disappeared, like a figment of my imagination.

“Oh good lord, tell me you saw that.” I beseeched my friend, whose eyes were nearly as wide as my own.

“What?” she said, grinning mischievously. “A handsome, dashing stranger in top boots and breeches? Oh, yeah, I saw him.”

My heart thudded—so he was real! “I MUST have my picture taken with him. When else am I ever going to find a man in Regency wear, right in my hotel?” I was NOT going to let the opportunity pass me by. Grabbing my camera, I dashed for the stairs, running up them two at a time.

The landing was clear of all but a few vampire stragglers, so I made my way to the ballroom, uncaring of the fact I stuck out like a sore thumb in my jeans and t-shirt among the fancy dress of vampires and vampire slayers alike. Mr. Darcy was here, and I was going to find him.

I pushed into the room, weaving my way through the banquet tables, squinting in the darkness as blue and red lights flashed on the dance floor. My quarry was nowhere to be seen, eluding me in the dark room as the rhythmic music thumped against my chest.

Disappointment tugged at my heart. What if I couldn't find him? The crowd had thinned out, and I carefully studied each person I passed. As the minutes ticked by, I began to despair that I had missed my chance. Perhaps I wasn’t meant to come face to face with the fantasy of a Regency rake. Perhaps fate was keeping me from encountering the very figure I spent my days writing about.

I turned one last time toward the dance floor, and suddenly, there he was. I took two steps toward him as he strode purposely my way. I smiled nervously as I clutched my camera. This moment was to be mine. Elizabeth Bennett, eat your heart out.

The music came to a close as he stepped from the dancefloor, his back boots shining in the flashing lights around us. Just as he neared close enough for me to talk to, the DJ started a new song, and the harsh notes of modern pop pulsed through the air around us.

Immediately, Mr. Darcy stopped and turned to the man beside him. I watched in utter disbelief as the men clasped hands and jumped up and down like a couple of school girls, squealing, “Lady Gaga!” before turning on their heels and sprinting back to the dance floor.

And just like that, the fantasy popped like an overfilled balloon. I’m not sure if I will ever look at Mr. Darcy the same again, lol!

Tell me the truth: Would you want to meet a real, live Regency rake? If not, than who is it that would have you whipping out your camera, desperate to catch the moment you met them on film? Captain Jack Sparrow? Wesley from the Princess Bride? Robinhood?

Kitchen Update: The home stretch!! All the remains is for me to grout the newly tiled backsplash, to touch up the trim that Kirk installed this weekend, and to unearth the cupcake pans. Yay!! Pictures to follow next week J

This weekend, I answered the phone and heard a very unexpected surprise. No, not anything with the Golden Heart; no, this was even better. My old driller and dear friend, Jimmy, called to see how I was doing. :)

“I’m jus’ sittin’ here watchin’ my grandson’s ballgame, and you popped inta my mind. I thought, ‘ya know, I wander what that girl is up to.’ So, I picked up the phone to give ya a ring.”

Lord, that man knows how to put a smile on my face :) For a quarter hour or so, we shot the breeze and caught up on each other. He offered his hearty congratulations on being a finalist, and I lamented the absence of fish taking his bait this season. I could picture him plain as day, with his white mustache and decades old Alabama Crimson Tide hat perched on his head, wearing a well-worn pair of blue jeans and a button-down flannel with the sleeves rolled up as he sat on the bleachers. His arms would be crossed against the almost overwhelming impulse to tell them dag-gum coaches what for.

As he talks with me, gruff and brusque as ever, I can’t help but think on how much my life has changed in the past year and a half. Memories slip through my mind of the not so distant past, which somehow seems like a different lifetime altogether. Each step I take towards publication takes me that much further from those years of hard labor, Alabama heat, and the job that demanded so much of my mind, body, and soul. I think back on that time and wonder how on earth I ever did it. Cozy in my home with lounge wear on and a laptop computer at my fingertips, it is easy to forget those years and the person I once was.

But sitting there, laughing out loud with one of the truest, most genuine people I have ever met in my life, I’m infinitely glad for that time in my life. Where would I be without my own, personal Good Ol’ Boy cheering me on? A man who, two years after parting, would be sitting at a little league game, thinking about the crazy girl he used to work with who dropped everything to chase her dreams? I don’t even want to know.

I’m so grateful for the winding path of life, which brings into our lives a cast of characters who help to shape who we are. Jimmy is my greatest gift from that particular turn in the road. We just never know when we will meet someone who will make a long and lasting impression on our lives, be it a future husband, best friend, confident, or even your own personal cheerleader, calling to say hello and brighten your week.

Who are some of the people in your life who became an unlikely friend? Have you ever been surprised by the impact someone made in your life?

Speaking of meeting new people, I will be at the RT Booklovers Convention this week If any of you are planning to attend, I hope you’ll let me know!