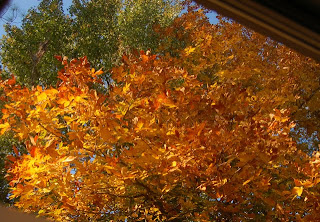 With the leaves swirling colorfully around our property this weekend, I watched my husband on the riding lawn mower as I stood sipping hot tea on the back porch. The fresh, chilly air combined with the unmistakable smell of fuel, and before I knew it I was laughing at a long buried memory.

When I was 14, I, like every other red-blooded American teenager, heartily wished that I could drive. I wanted it so bad, I could clearly picture myself behind the wheel, hands gripping the hard leather steering wheel as the countryside galloped by. Of course, said driving privileges were still a year and a half away, so I had to take what I could get. For a semi-country girl on a large grassy lot, that meant the riding lawn mower.

I can still see it, its dull silver paint glinting dully in the sunlight, that handsome orange pinstripe adding panache to the hood, and the hard-earned rust spots adding character to its motorized allure. Ahh, that deafening roar of the engine, the complete lack of shocks on the seat . . . really, what more could a girl want? 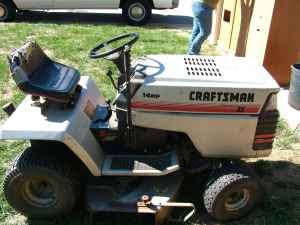 Now, my parents were more than happy to allow me that particular chore, and I would spend hours driving in long, straight rows, achieving an evenly mowed lawn by 2 foot intervals. If I mowed the front, the back, and the back-back, I would finally pull into the garage three hours later, my whole body vibrating even after the mower was turned off. And I loved it. After all, does not a riding mower have a steering wheel, a key in the ignition, an engine, and 4 wheels? It felt like freedom.

So, you can see how this marvelously legal-for-a-14-year-old-driver machine would be too much to keep to myself. I distinctly remember a lazy Saturday in autumn, not too long after school had started back up. My friends Carly* and Jane* were over at my house for the day, and we were bored and looking to get into a bit of fun. The air was cool and clean, the autumn leaves had begun to blanket the countryside, and, with my parents gone, the world was our oyster.

It is lost to the annals of time how it came to be, but that day I decided I wanted to take my friends on a joy ride.

So out came the mower, in all of its 14 horsepower glory. With me in the driver seat, Carly on the left fender and Jane on the right, I popped that baby into first gear and we took off with a jolt. Soon we were cruising at top speed, 4, maybe 5 miles an hour, laughing with the abandon that only a group of teenage girls can muster as we zipped around the back-back.

I expertly maneuvered around the gopher holes, deftly avoided the tree (yes, a full acre lot with only one tree), and rode hell-bent for leather down to the property line and back. Straight lines be damned (but only because the blade was disengaged), I looped into figure eights, threw in a few jaunty z’s, and even wrote out my initials.

Our hair windblown—well, lightly feathered, anyhow—at last we had exhausted the fun, and I dropped my giggling girlfriends at the back deck before parking my silver steed in the garage, no one the wiser. We floated through the rest of the day on the exhilaration of the ride and the secrecy of it all. Oh yes, we were wild, we were young, and we were rebels.

Come Monday, it was back to school as usual, and we three plodded through our day. After 6th period, Jane came skidding around the corner and ran towards my locker. “Oh my God!” she exclaimed, breathing hard with the effort to make it to my locker and back in the 4 minute break. “You won’t believe what Mr. Simpson said during class!”

Mr. Simpson was the Health teacher, and was known for his sometimes racy stories and videos. He was also a neighbor of ours.

“What?!” I exclaimed, thinking that there might be some juicy sex-ed trivia involved.

“He told the class that he had seen the absolutely most bizarre thing over the weekend. He said that he had looked out the back window when he sat down to lunch on Saturday, and couldn't believe his eyes when he saw three girls piled onto a riding lawn mover on the neighbor’s property, inching along while screaming and howling with laughter. He said it was the damndest thing he ever saw! The whole class laughed and laughed!” Jane looked like she couldn’t decide whether she should be horrified or laughing.

“He didn’t say anything in 4th period!” I exclaimed, having no trouble choosing horrified.

“Duh! That’s because he knows that you were one of the girls, stupid! He didn’t know about me!” She decided to go with laughter, and bent over at the waist to indulge.

Thank goodness no one else realized that the story was about me, but I couldn’t look Mr. Simpson in the eye for a good two weeks after that. From that day on I only pulled the mower out for serious work, and the back-back, visible to Mr. Simpson, went unmowed more often than not. But the memories of the laughter, hair flying in the breeze and the intoxicating feeling of freedom will stick with me forever.

*Names have been changed to protect the ridiculous ;) Bonus points if either of said friends out themselves!

Were you ever busted for doing something silly with your friends? Embarrassed by a neighbor? Does the crisp, cool air of autumn always remind you of a particular memory?

Today’s recipe was perfected, well, today! For those of you looking for something sweet, rich, and with a bit of a pick-me-up, I give you: 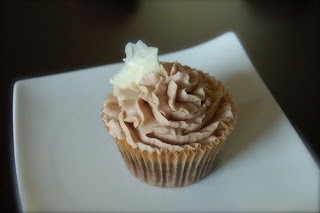 - Irish Cream Liquor (for use after cupcakes are baked)

Microwave chocolate and butter in large microwaveable bowl on HIGH 2 min. or until butter is melted. Stir until chocolate is completely melted. Stir in sugar and vanilla. Add eggs, 1 at a time, beating with electric mixer on low speed after each addition until well blended.

Combine the flour, baking soda, and salt in a separate bowl. If you are using all-purpose flour, it is best to simply sift it all together.

Distribute evenly into 24 paper-lined medium muffin cups. (I always add the batter to gallon sized Ziplock bags and cut a small hole in one corner for easy distribution. This batter will be very thin)

Bake 13 to 15 min. or until toothpick inserted in centers comes out clean. Be careful not to overcook! Cool in pan 10 min.; remove to wire racks. Let cool for about 2 minutes, then poke holes in each cupcake using a toothpick. Pour about a half a capful of Irish Cream liquor over the holes, and let sit until absorbed. After about 5 minutes, remove cupcakes from pan and allow to cool.

Garnish with white chocolate, and enjoy!

Update - Just wanted to say that I am sure you could use a box mix of the chocolate cake as well. Just be sure to soak with the liquor when you pull it from the oven :)