Car Trips of Thanksgivings Past

Ahh, Thanksgiving. Probably my very favorite holiday of the year. Remarkably, it has managed to stay commercial-free over the years, which is more than I can say for just about every other holiday out there. I love the very idea of a day dedicated to giving thanks for all the blessings in our lives. Without the pressure of buying the perfect gift, we can gather with our families and celebrate good food, good company, and another year of not killing each other.

Alas, this year I am sorry to say that Kirk and I will not be able to be with our families as we chow down on the single greatest turkey recipe known to man (thank you Alton Brown!). And while I am grateful that we have the opportunity to join forces with our friends and next-door neighbors for dinner, I can’t help but reminisce about Thanksgivings past.

In my earliest memories, my family would pile into the old station wagon and head north for Turkey day. As many of you may know by now, my Nana and Papa lived in an Indiana suburb of the vast city of Chicago. When I was very young, we lived in Georgia, and then later Kentucky. Though spending time with family for the holidays is a good idea in theory, the drive to see them was inevitably more than my siblings and I could handle. The trip always seemed to unfold in exactly the same way.

“Okay, I have a roll of nickels for each of you.” My mom twisted around in her seat as my dad stared straight ahead at the swiftly moving road.

A cheer erupted among the three of us, stuffed unceremoniously in the back seat. Our greedy hands thrust forward, we waited impatiently for what amounted to a month of allowance to drop into our palms.

My mother held up her hands. “Now wait a minute. There is a catch. Each time you act up, you are going to have to pay me a nickel. When we get to Nana and Papa’s, you can spend the remaining amount on anything you want.”

“Even candy?” My brother asked incredulously. We were never allowed to eat candy. (Or white bread, junk cereals, or the mysterious foodlike substance known as Little Debbies)

“That’s right, son. Anything at all, even candy.”

We three looked among ourselves with wide eyes and open mouths. Candy!

My mother looked us each in the eye, as best she could with the restrictive seat belt and high headrest. “Now remember, you will have to give up a nickel each time you act up, so the better you behave the richer you will be.”

We nodded as solemnly as we could manage until the heavy, papered cylinders were dropped in our hands, then we squealed with delight and squirmed in our own seatbelts in a quasi victory dance.

My brother is older than me by 2 years, and my sister is 3 years older than him. As the youngest and smallest I was always the one strapped into the middle seat, feet resting on the mysteriously raised hump that usually made the position undesirable for big people.

For those first few miles we would giggle with each other, point out the window at randomly entertaining objects, and blurt out annoying lyrics to the kid-friendly songs that we were allowed to listen to. Oh the adventure! The freedom of the open road! The ability to use travel toothbrushes (yes, the obsession started early). It was all rainbows, and sunshine, and dreams of salami sandwiches that would await us when we reached Nana and Papa’s house.

And then my brother would poke me.

To this day, I swear to you that he started every fight. His clever hands shot out the moment my mom and sister were not paying attention, his finger jabbing sharply into my side. I angrily protested and poked him back. Of course it was only fair that the retaliatory strike be of greater force and better aim. He howled in protest and smacked me on a bare leg.

The resounding sound of flesh colliding with flesh instantly grabbed my mother’s attention and she whipped around to glare at us. Instinctively she knew my sister was not involved, and she zeroed in on my brother and I. Her large mommy hand appeared in front of us as if conjured from thin air. “A nickel each. Now.”

“But Mom!” we wined together, before arguing with the ferocity rivaling any high-powered New York defense attorney about how the other one started it.

“I don’t care who started it. I am finishing it. Now give me 2 nickels for arguing.” She stared us down with the infamous and completely unreplicatable I-am-your-mother-do-as-I-say look.

Mournfully, we tore open the once perfect and pristine brown wrappers and extract 2 nickels. We looked up at her with puppy dog eyes that silently begged for a reprieve, and she simple folded the fingers of her outstretched hand in a maneuver universally known to mean cough it up, buddy.

Ten cents. Gone, just like that. Holding back tears I stared at the depleted roll of coins. There was no way that I was going to lose one more cent. When we got to Nana and Papa’s, I would still $1.90 to buy anything I wanted.

It was only a half hour later that my brother flicked my ear. I frogged his shoulder. And my mother put her hand out.

By the time we arrived, my brother and I would have not but the empty paper wrappers to show for our efforts at being good. Our sorrow was quickly assuaged, however, when we remembered that Nana always had candy jars aplenty. With mouthfuls of M&Ms and gumdrops to spike our spirits—as well as our blood sugars—we soon forgot our losses and threw ourselves into the business of gorging ourselves.

For the big day, we headed over to my aunt and uncle’s house, where long card tables nearly circled the house, and cousins, and second cousins, and aunts and uncles and grandparents aplenty filled the house with noise, and laughter, and the overriding sound of football on the TV. When we sat down, the rolls would be passed, we chose between white and dark meat, jello moulds, sweet potato casseroles, mashed potatoes, green bean casserole, gravy, and just about everything else you can possibly think of. The meal lasted for ages as we ate, and talked, and ate some more.

After the last dessert was eaten and darkness blanketed the cold suburban landscape, we returned to Nana and Papa’s, sated, happy, and tired.

At the end of the weekend, we piled once more into the car, waving enthusiastically at my grandparents as they stood on the stoop. As my father backed into the street and put the car in gear, my mother would turn in her seat once more. “Okay, I have a roll of nickels for each of you…”

In all trips that we took to see my mother’s parents, in all the years that we three crowded into the backseat and set off across the great mid-west, I don’t think I ever once arrived at our destination with a single cent to my name. The only consolation that I have is that my brother didn’t either ;)

So, what were your Thanksgiving Day traditions? Did you travel over the river and through the woods to Grandma’s house? And more importantly, do you eat turkey or ham? 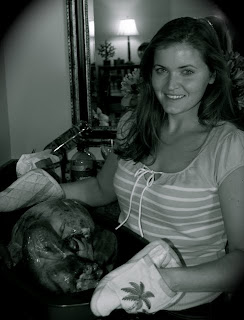 For me, I always preferred ham until the one Good Eats episode that forever changed my holiday menu. All I have to say it, this Thanksgiving, I am thankful for Alton Brown and his magically recipe that truly is Romancing The Bird. The single most magnificently moist, perfectly delicious - not to mention foolproof - roast turkey recipe ever, if I do say so myself. I have made this bird five or six times now, and my only changes are that I leave out the candied ginger and have forgotten the allspice berries a time or two. If you are having turkey, perhaps you will give it a whirl! 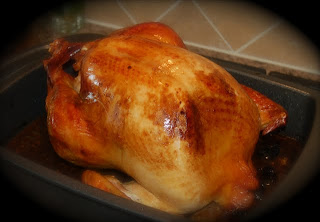