A funny thing happened Friday morning somewhere between my Cheerios breakfast and grilled cheese lunch. In the middle of my very normal day, I got to see a fairy tale come to life.

Up until the night before Prince William and Catherine Middleton’s wedding, I really had not paid much attention to the couple, or the events unfolding half a world away. Why should I? My love affair with England can be narrowed down rather succinctly to the years between 1810 and 1825 or so. Not strictly Regency, but close enough. And not even the Britain of real life, actually. Just the one where dashing earls and dukes win over their headstrong ladies, and the servants are always happily loyal and the smell of hothouse flowers and beeswax candles can drown out even the worst smells of the city.

I’m well aware that the London of today is very modern, with their share of political unease and clashing of classes. The era of the haute ton and all the finery and privilege is well and truly over.

But for some strange reason, the young girl within me stirred to life as the excitement built the day before the royal wedding. What would a rags-to-riches, modern day princess-to-be wear on her wedding day? Would people still throng the streets, looking for a glimpse of the happy couple like they had three decades earlier?

On a whim, I called a friend a little after nine that night and asked if she wanted to join me to watch the recorded wedding. She did, and by the time she arrived the next morning, I was assembling the ingredients for some remarkably delicious scones and heating the water for tea. She had worn a rather fetching hat of her daughters, while I had opted for my own mini fascinator.

With warm scones in hand and freshly steeped tea on the coffee table, we hit play and settled in to watch the wedding of the decade.

The two princes were handsome in their respective uniforms, Prince William looking a bit nervous while Harry flashed his cheeky grin. We giggled together like school girls as the men strode into the church, strong, and young, and delightfully happy. We watched with awe—and some laughter—as the guests arrived. The gravity defying headpieces of the ladies, the debonair morning suits of the men—it was all so very British.

At last we saw a flash of white as the bride was whisked into her waiting car and ferried across town to the Abbey. We held our breath and waited, hoping against hope that her dress would be perfect—the fairytale gown that we secretly wanted it to be.

The car stopped, the bride disembarked, and the world collectively gasped at the utter perfection of the moment. The dress exceeded my every hope, the veil was divine, and the tiara made every woman in the world smile and nod approvingly. No garish jewels, or plunging necklines, or modern silhouettes. Just the personification of grace and beauty.

We watched her every step as she and her father proceeded up the aisle, angelic music rising through the trees into the soaring rafters. The abbey seemed alive at that moment, filled with palpable joy, and hopes, and whimsy.

At last they reached the alter, and the groom held out as long as he could before finally turning to see his bride. We sighed with satisfaction at the look of honest love and admiration he bestowed on his soon-to-be wife. After a beautiful ceremony—one that felt as though it really meant something—the deed was done, and the newlyweds made their way to the waiting carriage. I think we all read Catherine’s lips and grinned when she said, “I’m so happy!” at the end of it all.

We watched as they made the journey to the palace, waving regally from the century old carriage. Flags waved, people cheered, and good wishes abounded until finally the couple emerged on the famous balcony.

Then, at last, the prince kissed his princess, and the whole world cheered. And then they did it again, just because they could :)

My hubby asked me later what on earth the big deal was, because for the life of him he couldn’t see it. I think it was just a perfect moment in time, when we could all believe in love, and fairytales, and a genuine happily ever after. With a happy sigh I can go back to writing my own HEAs, knowing that, somewhere in the world, a prince has chosen his princess not for her connections, not for money, and not because anyone told him to. No, he chose her only for love, and I’ll drink (tea) to that.

Did you watch the royal wedding? Were you one of the diehards who set the alarm for unspeakably early hours in order to watch it live? Were you mocked by husbands/boyfriends/bosses/friends? And was it all worth it? :)

I had a completely different recipe ready for this week’s blog, but changed my mind after the scones turned out so dag gone delicious. Here’s to the happy newlyweds! 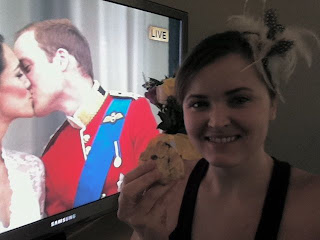 Using a food processor with grating blade, grate the butter. Combine flour, sugar, baking powder, and salt, in a separate bowl, then pour over grated butter and pulse until combined. Add sour cream and egg, and pulse again until combined.

Toss in blueberries and strawberries, and lightly pulse until just combined. Turn dough out onto parchment paper-lined cookie sheet. Pat into an inch thick round, then sprinkle with coarse sugar. Use a sharp knife to cut into 8 triangles, and separate them on the parchment paper on a cookie sheet.

Bake until golden, about 14-17 minutes. Cool on a rack and serve with whipped cream.

Posted by Erin Knightley at 2:27 AM