Today is a very special day for my family, for it was 64 years ago today that my mother’s parents—my Nana and Papa—said I do. Both wearing tasteful suits, hers adorned with a corsage, it was a simple ceremony that marked the beginning of a lovely and long-lived marriage.

Papa was tall, thin, and sported a full head of white hair for as long as I can remember. By contrast, my Nana has always been short, plump, and red-headed. In the black and white pictures from their youth, he was the debonair giant to her diminutive yet voluptuous stature. Her hair neatly coiffed, his suit tidy and neat, they stood beside each other with sweet smiles and love in their eyes. 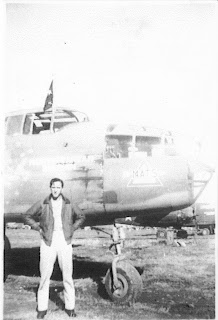 Nana was a soda jerk in an ice cream shop – a mere teenager when young Sylvester happened into the shop. Sassy girl that she was, Norma refused to serve the young Army man. Though he was a good five years older than she, in his early twenties, her flashing hazel eyes must have done him in, because from that moment on, he only had eyes for her.

Before long, he headed off to war, and kept up a faithful correspondence with his sweetheart. When he returned safe and sound, they were soon married, and in time they were blessed with my mother and her two brothers.

All of this part of their life I know though fading black and white photos, the occasional story or two, and even a grainy, soundless video. Really, it is all second hand knowledge. The real story comes from my childhood experiences—from those long ago visits when my parents would pile my brother, sister, and me into the car and take the long distance trek up to visit them.

When we finally arrived, we would pull into tidy driveway of the tiny, well kept, post-war suburban house that they called home for 50 years. Before we even came to a stop, Papa would have the side door open, eagerly waving to us as Nana stepped out on the stoop. No matter how tired or cranky we had been moments earlier, we three kids would bound from the car and eagerly accept their freely offered hugs and kisses.

Nana and Papa’s house was always immaculate, with the sound of one sports game or another filtering from the living room while the enticing scent of simmering soup wafted from the kitchen. They both took great pleasure in providing all of the forbidden foods we could ever want, and made extra sure that the house was freshly stocked upon our arrival. The greatest treat of all was always the box of fresh doughnuts that Papa would fetch from Dunkin’ Donuts the morning after we arrived for a visit.

Whenever I pass a frosting-filled powdered doughnut, I think of Papa and his twinkling blue eyes full of mischief. He knew how much we adored the dreadfully unhealthy but oh-so-delicious treats, and delighted in providing us with all the little things that we loved, but were never allowed to have in our own home.

Mom would shake her head at the indulgence, and Papa would chuckle, his voice raspy and hoarse from age and from the cigarettes he smoked before it became a cardinal sin to do so. Nana would offer up sugary junk cereals that had never once graced the table in our own home.

For lunch, Papa would descend into the semi-completed basement with its leaning pool table and 30 years of Reader’s Digest shoved into ancient bookshelves, and he would return bearing our very favorite cream soda that wasn’t sold where we lived. My mother would worry for our teeth, and our sugar levels, and our disturbing level of excitement as Nana popped straws into the 3 cans and dispersed the drinks among my brother, sister, and me.

The piece de la resistance was always the glorious salami that Nana would produce with a flourish at the strike of noon. She would spread the deliciously greasy slices onto decadent white bread (another no-no in our house), top them with a few thick slices of tomato, and drown the whole thing in Italian dressing before putting the sandwiches on paper plates and into our greedy hands. I think that sandwich is the taste of my childhood, if I had to narrow it down.

Our delirium would peak when we sat before the wood encased television that broadcast not just the local stations, but over a hundred off-limits cable stations as well. Papa would flip though the unending channels before settling on Looney Tunes. We would all laugh at the bunny’s antics and the duck’s slurred indignation. Papa, whose name was Sylvester, would call out to Nana, “Come on, my little Tweety bird, come watch our show with me.”

Papa always looked to Nana with love, respect, and adoration. I cannot recall a single time I heard reproach or censure in his voice when he spoke to her. Even now, I can hear his voice calling out to his wife as he did so many times through the years, “Ah, my wild Irish rose. My beautiful wild Irish rose.”

“Oh, Papa,” would be her coy response, chuckling and shaking her head while her eyes shone with pleasure. We three kids would giggle at their courtship, still alive and well after all those years of marriage.

Before we left at the end of one of our trips, we would stand outside on the concrete steps, hemmed in by the black iron railing and the beige, splitting shaker shingles that were always in need of another coat of paint. Nana and Papa would hug us, we would kiss their cheeks, and mom would pull out the camera and shout, “Say cheese!”

I think that there are a hundred of those pictures somewhere in the basement of my parents’ home, where old-fashioned print photographs go to die. The three of us kids, my tall Papa and his little Tweety Bird, smiling cheerily at the camera as we grew by inches and years.

Shortly before my husband and I married, I came to realize that I had managed to find a man who mirrored many of the qualities that defined my grandfather. Papa was perhaps the most patient and gentle man I have ever met. Whether teaching his grandkids to drive, waiting on Nana at the hair salon, or simply taking the time to properly shine his shoes, he never became exasperated or annoyed.

Patient and understanding, loving and respectful, Kirk was the perfect foil to my stubborn, outgoing, and impatient nature. I felt blessed beyond belief that I had found a kindred spirit to the grandfather I loved and admired so much, who had adored his wife so sweetly through the years. When Papa had patted my hand and told me that I had caught me a good man, I merely smiled and nodded my head. I knew without a shadow of a doubt that was true. 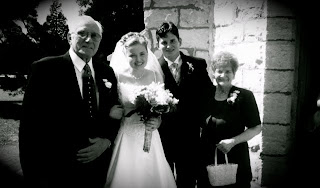 Four years ago, the whole family gathered in celebration of Nana and Papa’s 60th wedding anniversary. It was an amazing day, made more so by the clear devotion they shared. Since they had never had a wedding cake, I baked them a three-tiered, flower-adorned monstrosity, and we all watched in delight as they cut the cake and sweetly fed each other a piece. It was so heartwarming, and I frequently look through the pictures from that day. 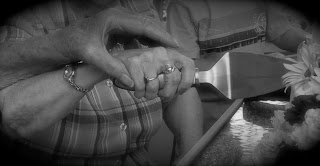 We all knew that there would not be many more anniversaries for them, and indeed the 61st was the last year they celebrated together. In August of 2007, Papa passed away at the age of 87. Though he is no longer here to celebrate with us, Nana and the family still commemorate the day, remembering the beautiful marriage they had shared and the outstanding example they provided.

When he passed away, we grandkids gathered around the small box of memorabilia that he left behind, choosing for ourselves the items that would best represent who he was to us. I was thrilled to accept his compass, saved from when it was issued to him during WWII. When I look at the aged, dinged metal case, decades old and yet still so beautiful and relevant, I am strongly reminded of Papa and the direction he provided for my life. He lived simply, honestly, and with so much love that I can still feel his presence in my heart today. I hope to leave a legacy half so well remembered as his. 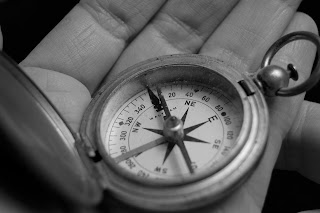 With joy in my heart, slightly damp eyes, and a smile on my lips, I lift my proverbial glass to my grandparents today. Happy anniversary, Nana and Papa! Thank you for the brilliant example you provided us. May the spirit of your blessed union live on for many, many more years to come. 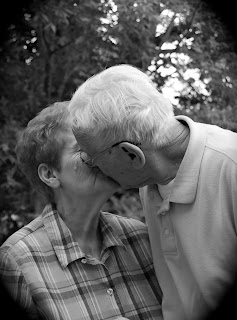 In honor of the occasion, I thought I would provide a different type of recipe today. Papa loved to make homemade soup, and had perfected several wonderful recipes. Today, I offer one of my own that I modified from this one...

2 - 3 cups bowtie pasta (based on preference)

In a medium bowl, combine the beef, egg, bread crumbs, cheese, basil and onion. Shape mixture into 1/2- to 3/4-inch balls and set aside.

In a large stockpot heat chicken broth to boiling; stir in the spinach, pasta, carrots, mushrooms and meatballs. Return to boil; reduce heat to medium. Cook, stirring frequently, at a slow boil for 10 minutes or until pasta is al dente, and meatballs are no longer pink inside. Serve hot with Parmesan cheese sprinkled on top.

And the winner of this weeks giveaway is…KARA!!! Congrats, Kara, on winning a four pack of muffins. Now lets see if I can create a great low-sugar recipe for you… :)

Posted by Erin Knightley at 9:52 AM