After a week of hard work, Kirk and I surveyed the fruits of our labor. Before us lay the beautiful, gleaming, unblemished and un-splintered expanse of our newly refinished dock. 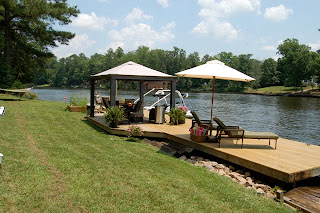 “I know,” said Kirk, snapping his fingers as though something wonderful had just occurred to him.
“What?” I ask, unable to look away from the freshly pressure-treated, golden glory of the smooth new dock boards.
“Let’s have a crawfish boil,” he replied, sweeping his hand in the air as he read from an imaginary marquee.
Still mesmerized by the finished product after so many hours in the sun, I shrugged. “Why not?”
Oh, darling reader, if only I could go back in time. Take early-June Erin by the shoulders, and shake some learned-the-hard-way sense into her. “Why not? Why not?! I’ll tell you why not!” I’d yell, in my best “you can’t handle the truth!” impression. Maybe my next character would be a time traveler, and I will live vicariously through her.
But it seemed like a good idea at the time. Have a party, enjoy the new dock, fire up the turkey fryer, and have us a good old-fashioned southern boil.
So I went about the business of planning the party. I sent out cute little e-vite invitations. I bought hanging plants and arranged the dock furniture just so. Kirk made a cornhole game (I did mention that we live in the south, right? Well, don’t judge me) while I sewed the game bags – black and white Mastercraft theme to match our ski boat. It was all very clever and lovely. 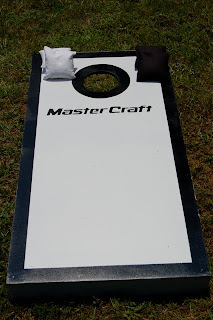 Posted by Erin Knightley at 1:22 AM