Because I love you - Epilogue for Ruined by a Rake!

Okay, okay—so I heard from some of you that you wanted a little more for Eleanor and Nick's happily ever after in Ruined by a Rake. Initially, I didn't have one because I knew we'd be seeing more in the second book. Indeed, Scandalized by a Scoundrel (out by Nov 15th!) is actually set during Eleanor and Nick's wedding.

HOWEVER, I never want to leave my readers hanging, so here now is the newly added epilogue from Ruined by a Rake:

Just what do you think you are doing?” 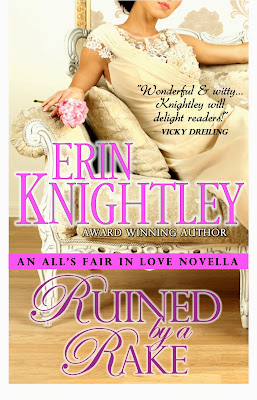 Eleanor froze mid-lunge, her foil extended straight out in front of her. Blast, she was caught. The babbling brook that had so enchanted her when they purchased their small estate had apparently masked the sounds of her husband’s approach. Biting her lip, she straightened and turned to face the music. Nick stood behind her, partially shrouded in the heavy sheet of early morning fog, his arms crossed and his brow raised expectantly.

She offered a bright smile, all innocence. “Morning constitutional?”

He let his hands fall to his hips, giving her a very nice view of his chest through the partially-buttoned, generously-cut white shirt. “Uh huh.” He started forward, closing the distance between them with four easy strides. “You, madam, know full well you are not to be out here like this.”

Even as he pinned her with his sternest expression, his lips still curled with a hint of that delicious smile of his. Her heart gave a little flip. Almost a year of marriage, and he still could take her breath away.

He stopped an arm’s length away and held out his hand. “Your weapon?”

Scrunching her nose, she tucked the foil into the crook of her elbow. “Don’t be silly, Nicolas. There’s nothing wrong with a little exercise. In fact, I think it’s good.”

He flapped his hand open and closed in the universal sign for hand it over. “The doctor said no strenuous activities.”

“Oh really,” she said, lifting an imperious brow. “If I recall correctly, you were quite enthusiastic about our strenuous activities last night.”

Nick gave a bark of laughter and shook his head. “Oh, sure—use that against me.” Chuckling, he slipped a hand over her shoulder and tugged her in for a kiss, foil and all. She sighed happily, readily leaning into his embrace.

When he pulled back, he placed a tender hand to her middle. The warmth of his bare fingers seeping through the fabric of her fencing shirt was nothing compared to the warmth of his gaze. “I know it’s very early yet, but put a poor soldier’s mind at ease, and do please stick to walking for your constitutionals.”

She loved when he looked at her like that, as though she were the most precious treasure in the world. Because of that look, she had taken the biggest risk of her life—throwing years of caution to the wind in order to be with him—and it had paid off beyond her wildest dreams. A husband who loved, respected, and cherished her, a much longed for baby on the way, and all the family members who really mattered—Aunt Margaret, Libby, and William—by their sides, refusing to be intimidated by Uncle Robert’s wrath.

She was happier than she’d ever been in her life, and she had one person to thank for it.

Covering his hand with her own, she sighed and nodded. “Fine, fine. Have it your way. But I warn you—I shall hold you accountable for keeping me entertained for the next seven or so months.”

His smile was slow and devilish and full of promise. “Deal.”

In one smooth move, he divested her of the foil and lifted her into his arms, making her laugh out loud. “Nicholas!” she gasped, clinging to his neck as he started back for the house.

Grinning, Eleanor settled into his arms, relishing the familiar smell of his skin and the feel of his muscled arms around her. There was no other place on earth she’d rather be. “Thank you,” she whispered, the simple words filled with a wealth of emotion.

He slowed and tilted his head so he could meet her gaze. “Whatever for?”

“For making me the happiest person in all of England.”

His arms tightened around her as he brushed a soft kiss against her lips. “My dear Ellie,” he said, his voice slightly gruff. “I’m merely returning the favor.”

SO, that's it for now! I hope you enjoyed this little extra, written with love just for you. And don't miss Scandalized by a Scoundrel, coming November 15th, for Amelia and Gabriel's story. 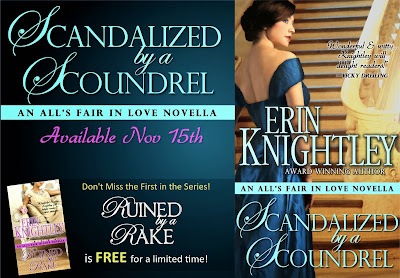 Posted by Erin Knightley at 5:32 PM