My Fun-filled Writer’s Retreat, or

How Five Women Bonded Over Salted Chocolate Caramels, Near-Death Experiences, and Late-Night Evictions, and Decided to Name Our Next Heroes Bob

So, with the Romantic Times Booklover’s Convention being held in Chicago this week, me and four of my writer friends decided it would be fun to meet before things got started and have a mini writer retreat of our own.

I know – brilliant idea. You’re jealous. Five woman sharing a gorgeous four bedroom condo in trendy downtown, chocolate and cocktails flowing freely while we put our heads together to come up with the next big thing, each of us destined to end up on the NY Times Bestseller list.

The first night was made of awesome. We laughed, we ate fabulous lasagna, we sat around the kitchen table and plotted like fools. We stayed up way too late, forgot to tell our families goodnight, and went to bed with visions of perfectly plotted books dancing in our heads. 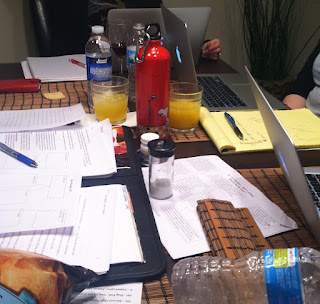 Day two started off well enough. Coffee, cereal, orange juice, and fruit were quickly consumed before we got down to business. The first part of the morning flew by in a flurry of brainstorming genius until, all at once, our heads jerked up.

“Do you smell that?”

The unmistakable, cloying scent of gas slipped around us, impossible to pinpoint but nonetheless present. We jumped into to action, opening windows and doors and calling the landlord. By the time the landlord arrived, we had effectively aired the place out. He looked at us, we five educated, intelligent women, and saw a passel of overreacting females. No matter how much we tried to convince him otherwise, he assured us that it must have just been the smell of the heat kicking on, and to call him if we have any more issues. (insert his barely contained eye roll here)

Skip ahead hours later. We’ve had an awesomely productive day, with lots of great ideas bandied about. We’ve had a few more very light hint of gas, but nothing like that morning. Then, out of nowhere, a strong whiff of gas has us all jumping from our chairs. By now the temperature outside had dropped to around 45 degrees, but even so we opened all the windows and doors, and called the landlord once more. He didn’t answer that call, nor were the calls to the ‘after hours emergency line’ picked up. After some debate, we decided to call the gas company directly.

Now, at this point we were concerned but not freaked out. But once the gas company told us to leave the premises immediately, being sure not to flip any light switches or do anything else that may cause a spark, we were well and truly worried. Grabbing our purses and laptops, we headed into the cold night, crossing the street to wait for reinforcements. 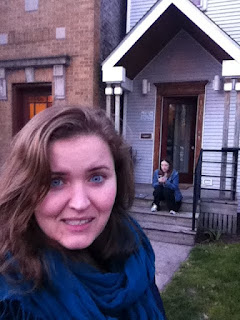 We must have looked like a bunch of refuges, lugging our computer bags, our shoulders draped in blankets and huddled together for warmth.

And then, like something out of a movie, we watched as the next door neighbor came out onto his porch, popped a cigarette in his mouth, lifted his lighter and—

He nearly dropped his lighter as five hysterical women screamed, arms waving, yelling for him not to light his cigarette. Eliza was the only one who thought to clarify, shouting, “I don’t hate cigarettes, but there’s a gas leak!”

This would, of course, be the exact moment that the gas company shows up. One look at their faces make it clear that they witnessed the five unkempt (who needs showers, make-up, or real pants when you’re writing??), hysterical women with blankets on their shoulders screaming and gesturing wildly to strangers fifty feet away.

Let me just tell you how eager they were to take us seriously. These two didn’t even bother to conceal their eye-rolls as they exchanged looks, gathered their equipment, and headed to the condo. Closing the doors and windows, they started in the kitchen. We got our first taste of justification when they found a tiny, barely detectable leak at the stove connecter. We got our second taste when the fireplace was found to be leaking like a sieve. The little meter doohicky sounded like a tornado siren by the time he stuck it next to the logs.

Then he went upstairs. From below, all we could hear was muffled, “Oh, no. No, no, no. No, no, NO!” When he finally descends, he’s shaking his head. “You have nothing here going good. We’re shutting off the gas to the whole place.”

In the words of Eliza Evans, what sweet, terrible vindication!! Having realized that we are not just a bunch of panic-stricken females, the gas guy is quickly becoming a friend. Had he not just saved us from blowing up? After learning about all the illegal things going on with the (*leaking*) furnace and water heater, we’ve decided we must dedicate out next books to Bob. By the end of the night, he leaves with two signed books, a handful of bookmarks and post-it notes, and a reader gift bag. 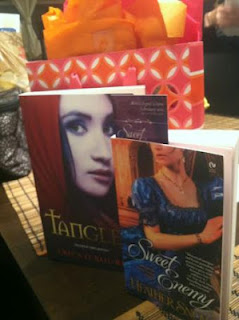 And we leave as well – heading to the conference hotel a day early. On the way, I leave a voicemail for the landlord that still has not called us back. “Dear landlord. The gas company has found four separate leaks and three code violations. They have shut off the gas to the condo, and having no heat, hot water, or stove, we are headed to a hotel. Feel free to call me tomorrow if you need to know where to send the refund. Love, the non-delusional, wholly vindicated, justifiably irritated renters from Apt. 2B”

Side note: We made a pact to check into the hotel and hightail it to the room as fast as possible, not wanting to be seen in all our grungy, make-up-less glory. Which is why, of course, I saw every person I have ever known hanging out in the lobby that night, lol. Thank goodness I’m not yet published, so there were no readers who could recognize me… unlike the talented Heather Snow, who had just that happen. :-) Seriously, I’m still laughing just thinking of the look on Heather’s face when the reader came up to her.

(If you would like to see a play-by-play account, we used the hash tag #gasleak12 to document the whole debacle)

Moral of the story? It’s trifold

1) Never underestimate a woman's mental capacity (or five women, as the case may be)

2) Always brush your hair, even if you don’t plan on leaving the house. You never know!

3) Never cross a writer – you’re bound to end up the scullery maid or rat-catcher in their next book! (I’m talking to you, Mr. Landlord!) On the flip side, if you’re nice, you may end up with a dedication. Keep an eye out, Bob the hero – you, sir, shall be immortalized in my next book!

If you could immortalize someone – be it for something good or bad – who would it be? Why?

Well, in honor of the most awesome dessert cocktail ever that we ordered at the hotel, here is a recipe for Godiva Chocolate Martini’s! 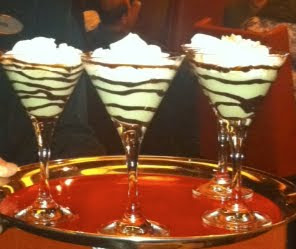 Mix all ingredients in a shaker with ice, shake and pour into a chilled, chocolate-swirled cocktail glass. Top with whipped cream and enjoy!