So, a week and a half ago, I was crazy busy at Nationals, running from workshops to pitches and back again—all in my fabulous purple heels—when I received a voicemail from my husband. Well, isn’t that nice? He was thinking of me.

With my heart swelled with joy and a goofy grin on my face, I hit the play button.

“Hey Love. Just calling to see how you are doing. I hope your workshops and meetings are going well. So, what would you think if you came home to a third dog? Okay, have a great day, bye.”

It all started with an innocent trip to Staples. All I needed was one little pack of printable business card paper before my trip to Nationals. Kirk was set to leave for a weeklong business trip on Sunday, so we both headed into the big city on Saturday to pick up some snacks at the grocery store and said cards from Staples. We were in and out in under five minutes, and as we tromped back to the car, my husband noticed a sign next door at PetSmart. “Franklin County Animal Shelter Adoption Event.”

Oh, how innocent it seemed at the time.

Kirk cajoled and I acquiesced, and in we headed in to ogle the puppies. In three seconds flat we saw her. A little black and white border collie mix puppy, staring at us through the slats of her prison.

Kirk eagerly held his arms out and collected the little jailbird, and we headed to the back of the store to play with her in peace. She was a little older than a true puppy, a week over 4 months old. She had just gotten spayed, and her stitches were still in and she wanted nothing so much as to curl on my lap and cuddle. 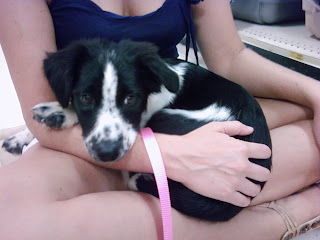 Alright, she was cute. Really, really cute. We stayed with her for almost half an hour before handing her back. Since we would both be out of town for the week, there was no way we could take her then (thank goodness), so I gave the foster mom my card, and said we would think about it.

From that point in time, my and Kirk’s excitement levels took decidedly different paths:

Excitement for Getting Another Dog 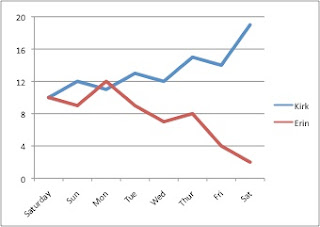 It was all fun and games in PetSmart, where we could easily hand the puppy off and go about our merry ways. Once I left her behind, however, I started thinking of how much hassle a new dog would be.

Let me explain: We have two dogs. Two. Indoor dogs. Big Dogs. One for each hand to grab their collars, or his and hers when we take them for a walk. Two huge beds that take up half the living room, two more beds that fill the bedroom, two bowls, two types of foods (opposite allergies – isn’t that convenient), and two special pewter leash hooks on the wall (thanks mom!) to go with our two overzealous, self-entitled waterdogs. Oh, and not to mention one ancient, ill-tempered, plans-on-living-forever cat.

By Wednesday, the thought of adding a third dog to the mix made me woozy. Why had I ever even considered it? Things were perfect. Our girls were (mostly) trained, I rarely had to deal with accidents, or running away, or destroyed furniture.

I fretted about transportation (the two only just fit in the back seat), staying at other people’s houses, the cost of food, the time involved in raising a puppy, the accidents, the destroyed furniture. We dearly love Maggie (dog #2), but as a puppy, she actually ATE our old house. She ripped up carpet, chewed the banister to pieces, destroyed a coffee table, and managed to reek havoc in one catastrophe coffee-grind-eating event that resulted in having to tear up the carpet to replace with hardwoods AND paint the ruined walls (word to the wise, keep coffee grinds out of reach of any dog. Trust me.).

On top of everything else, since I would be the one in the house most of the time, I would be responsible for training. The more I thought about it, the more I thought we should wait. I told Kirk that we could get a new dog when Sadie, our oldest, turned 10 in a year and a half.

And then I got the voicemail.

While I had been dredging up all kinds of logical and valid reasons on why not to get another dog, Kirk had single-mindedly decided he wanted her, and upon returning from his trip, had promptly headed out to see her again. Thus, the phone call.

As panic sluiced through me like wildfire, I fumbled to call him back before he handed over a check and walked that dog right out of the store and into our home. I caught him in time, thank heavens, and told him I didn’t want him to introduce a new dog to our girls without me there. Thankfully, it worked, and he went home empty-handed.

By the time I returned on Sunday, his mind was set: He wanted the dog. I hemmed and hawed and basically made my reservations known. Finally, I asked him if he would be okay if we didn’t get the dog. He looked at me with an outstanding impression of a wounded puppy and said, “I’ll forgive you … eventually.”

And of course I knew it. We were going to get the dog.

On Tuesday, I went to pick her up. I had to admit, she was pretty stinking adorable. She was reserved but sweet, and before long, we were on our way to the vet for her ‘welcome to the family’ checkup. A bag of medications and hefty bill later, we were good to go. 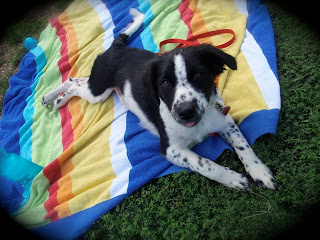 First moments home with me

When we introduced her to the dogs, it actually went very well. Surprisingly, it was kind of a non-event for our first two dogs. The biggest problem we had was with the lack of puppy-proofing in the house. She brought me socks, dust bunnies, candles, a rug (yes, an entire throw rug) and extension cords. Every time I looked away, she’d magically procure some unknown object to chew on (I had no idea we had tracked so much mulch into the house.)

Tuesday through Friday, she was pretty much my responsibility, and I was worn out. I was starting to worry that we had bitten off more than we could chew. I hadn’t got but five words down on a page since her arrival since I was constantly jumping up to see where she was and what she was doing.

Oh, and because she was adorable. It is almost a physical impossibility to work when these eyes are staring up at you: 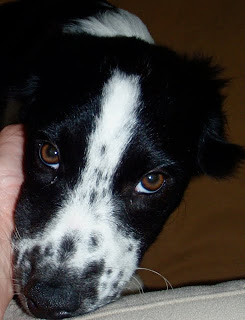 Using her cuteness for evil

So I played with her, and we trained, and we worked on proper eating and treat etiquette. Very quickly, it became apparent that the dog was smart. Really, really smart. The kind of smart that makes me nervous. So far, however, she was using her powers for good. Within the first three days, and with the help of her sisters, she had already learned sit, upstairs, downstairs, outside, inside, no, and good girl. 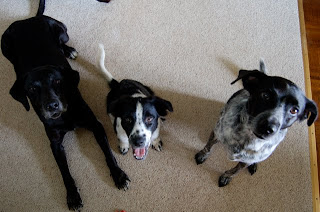 Learning “sit” with her sisters (Maggie went straight to “settle,” but at least I got them all looking at the camera!)

More importantly, she had learned her new name: Darcy.

She also got her very first bath, and looked adorably rumbled (like another Darcy I know *cough* Colin Firth *cough*). See all the crinkly hair and those endearing eyes? 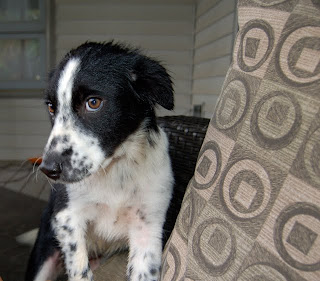 Saturday morning, after a long first week of the puppy and me training each other, I made Kirk get up with the roosters when Darcy awoke. For an hour or two he kept her occupied while I slept. When I came up the stairs, the first words out of his mouth were, “I had no idea how much work she is! How do you get anything done?”

*Grins* Sometimes its nice for all of your work to be recognized. But you know what? Along the way, I stopped worrying about the food, the medicine, and the ride to the vet with all three girls in the back. I set aside the possible scenarios and visions of ruined furniture that had been stressing me out. And…

And I fell in love.

In only a few days, she totally, irreversibly captured my heart. That wonderful, magical, delicious lick of puppy love that warms every recess of the soul and makes the world seem a little rosier. The unexpected pang of the heart growing several sizes larger so to accommodate one more when you didn’t think it possible. 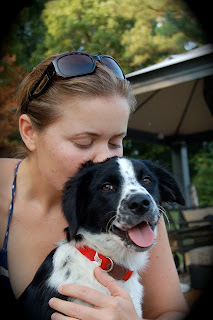 I look at her, and I don’t care that I had to get up no fewer than 13 times while writing this blog to pull something out of her mouth and make sure she wasn’t getting into trouble. I don’t care that she is an early riser and demands much more of my time than I have to give. I don’t even mind when I try to take pictures of her and she ends up gnawing on the lens cap. 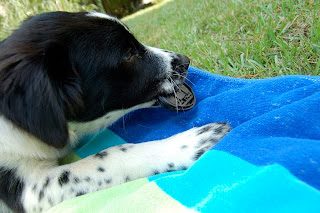 Funny how a sweet little puppy can bring so much joy into my life, even when I thought I didn’t want her. Silly me :) Oh, and of course we are giving our first two girls plenty of extra love. 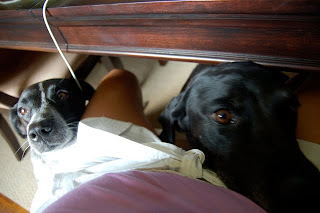 So here goes our little (big) family, headed down the long, winding road of our lives. Looking forward, leash in hand and a smile in our hearts :) 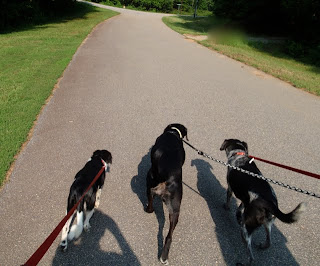 Have you had something change in your life that turned out for the better? Have you ever struggled with adding '1 more' to the family, be it dogs, cats, bunnies, or even kids?

PS – Just to illustrate what I mean by ‘scary smart,’ Darcy went through the doggie door for the first time just now. I followed her into the garage and out the next doggie door. She went outside, slipped through the fence, pottied, then went around to the front door for me to let her in. Did she just potty-train herself?!?

Of course, I wanted to do a baked good that would honor the occasion: 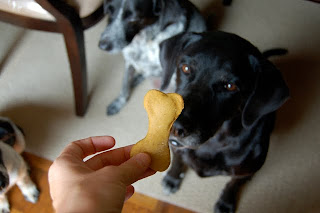 This is a modified version of the recipe found here

3 Tbsp peanut butter (I buy only natural PB with 2 ingredients: peanuts and salt)

2. Mix together the flour, eggs, pumpkin, peanut butter, and cinnamon in a bowl until well combined. Roll the dough into a 1/2-inch-thick roll. Cut into 1/2-inch pieces.

3. Bake until hard, about 40 minutes, or less if cut into smaller pieces