*Note: Sorry, dear readers, I don’t have any pics up just yet. My hubby took off for the mountains with the hard drive in his bag, so you will have to use your imagination in the meantime ;)

One of my very first posts on this blog was about a dear friend and one of my all time favorite people the world, my old driller Jimmy. He seemed to be a cake-reader favorite, so today I thought I would tell you the story of how it all began, five years ago this month.

Our first meeting would prove to set the tone of our relationship, and took place in Tuscaloosa, Alabama on one of those scorching hot southern summer days, the likes of which surely prompted the invention of iced tea. My boss had set up the details for that particular job, and I was merely to show up and oversee. This was my first time in the field without supervision, and I was nervous and anxious about the job. My boss had given me but few instructions: We were to hand auger in the right-of-way as deep as we could go, then install two wells. Oh, and don’t hit a gas main and blow the place up.

Gee, was that all?

Now, here I am, still a newbie in the field, a nervous twenty-something year old girl clutching a clipboard and a pen, wearing OSHA approved safety glasses and a bright orange vest. My crisp new polo shirt was tucked into my squeaky clean cargo pants, and my fresh-out-of-the-box steel-toed boots hadn’t a scuff on them.

It wasn’t long before a dark blue Chevy work truck pulls up, and out comes Jimmy. He was in his mid fifties, about my height, and fairly fit. He was decked out in a pair of old jeans and tee shirt, with a thoroughly stained Alabama Crimson Tide hat perched on his head (which I later discovered would be an absolute staple).

“Good Morning,” I said with a polite smile pasted on my lips. “Are you Jimmy?”

“You bet I am,” he replied with a nod of his head. “Where ‘re we drillin?” He looked around at my neat cones and the wax pen “x” I had carefully draw on the pavement. “Bout there?”

He had a way of talking that was fast but with a pronounced southern accent, like he was in a hurry but couldn’t help but linger over his favorite syllables, so he made up time by dropping either the beginning or end of a word.

“Yes sir, that’s one and the other is around the building.”

Before another word was spoken, a huge, noisy, diesel fuel belching dinosaur of a drill rig roared into the parking lot.

“Bunch o’ idiots, what took em’ so long,” he muttered, shaking his head. He started gesturing to the men in the rig in a manner that seemed to say where the hell have you been, get your lazy butts over here boy without saying a word.

“Uh,” I stammered, “What’s that for?” I look down at my notes, and there in my own handwriting are the words “hand auger” underlined and followed by three exclamation points. I look up again at the enormous rig and the three men spilling out of it.

“Your boss says you need a hole, so we gonna drill you a hole.” He smiled winningly at me while I stared back dumbly. He started directing his workers this way and that to get things in place.

I looked on helplessly as the men scurried about, ancient hardhats pressed on their heads and cigarettes dangling from their lips. My stomach lurched as I mentally tallied the costs of four men and a drill rig as opposed to one man and a hand auger.

My boss was going to kill me.

No, this wasn’t my fault. I was where I was supposed to be, decked out in all of the appropriate safety gear. I had business cards with my name scrawled on them and even an official clipboard, for heaven’s sake. Everyone knows you have to listen to he guy (or girl) with the clipboard. I straightened my shoulders and said, “Um, these holes need to be hand augured.”

“What?! Boss-man didn’t say nothin’ ‘bout that. Listen, you need some holes drilled, and we can punch ‘em in right quick with this here rig. Now stand back.” He turned on the rig and started maneuvering it over the marking. One of the workers, who I would later learn is his youngest son, shook his head in the background with a role of his eyes.

Jimmy pushed and pulled the little levers, authoritatively hollering at his men to get the first rod ready. I looked down at the sidewalk, and the spider web of spray painted markings indicating the various priceless utilities beneath our feet. The mental cash register cha- chinged over and over in my head, adding several zeros to the end of the amount for when the drill rig nicked the water main, or the aforementioned gas line.

I stared in disbelief at the man, who had just completely disregarded what I was trying to say. A cold sweat broke out on my forehead and I swear I could hear the local news playing from the future. Tonight at eleven, reckless and negligent Environmental Specialist blatantly ignores boss’s instruction, knocking out cable to over 7 million customers. Said customers vow revenge by strapping the culprit to a pole and doling out lashes with a wet noodle.

“No!” I exclaimed, swearing off pasta for the near future. “These holes have to be hand augured." He raised one eyebrow at me, but I forged on. "We are in the right-of-way with all kinds of utilities, and the deal was, the holes have to be drilled by hand. We are paying you to do the job, so either do it my way or get out of my way so that I can do it myself.”

Jimmy stared at me for a moment, and I inwardly cringed at my outburst. Slowly, though, he cracked a smile and turned off the drill. “Alright, girl, lets do it your way.” He winked at me and turned back to order his men to get the dag-gummed thing the hell out of the way. Didn’t they know we was hand augering?

From the very first, I learned that Jimmy could be one hell of a bully if you let him. He’s been in the business for more than four decades and liked to do things his way, which for the most part means that his way usually is the best way. Through the years Jimmy became an invaluable professional resource to me, as well as an unlikely friend who I would (indeed who I have) trust with my life. When he reverted to his bull-headed self on occasion, I smiled at the memory of that first encounter, and how I whipped my very first good ol’ boy into shape. And whenever my sass wasn’t enough, he could always be bought with cookies :)

Speaking of which, today I’m offering up one of the single best cookie recipes in the history of mankind. Seriously, try them and I defy you not to agree with me!

Now, I want to hear about someone you actually stood up to, and was better for it. A character like Jimmy? A bully-turned-friend from school? Perhaps even your parents? And let me know if you want more Jimmy—I've got a pile of anecdotes just waiting to be told ;)

ANNNDDDDD..... Since it has been too hot for shipping cupcakes, I am offering a package of these cookies PLUS (or one or the other if you don't want both) your choice of one of the below pictured brand new books to one lucky commenter! Just chime in to be automatically entered. Winner will be announced on next Tuesday's blog. Good Luck! 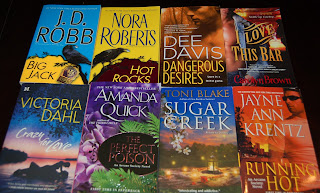 Modified from a recipe given to me by my friend Wendy :)

Mix together butter and both sugars until fluffy (a few minutes) Add vanilla and eggs, mix until just blended.

Mix together flour, baking soda and salt, and slowly mix into batter. Add the toffee and both chocolates, mixing well.

Drop by rounded spoonfuls onto cookie sheet, bake 9-12 minutes, or until done.

Posted by Erin Knightley at 1:09 AM