Did you know, dear reader, that I love you? Well I do! 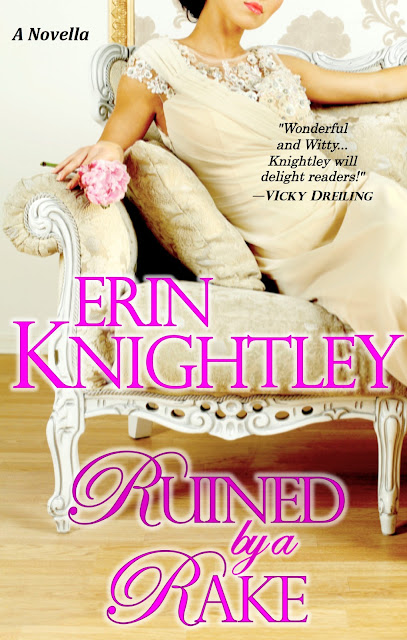 What's this, you ask?  No, it's not an April Fool's joke — this is my super secret, surprise treat just for you!

RUINED BY A RAKE is a novella that I whipped up purely on a whim. It is a fun, flirty read meant to fill the gap until my next novel, FLIRTING WITH FORTUNE, releases in September :)

It's available right now (or within the week for some of the slower e-book retailers), and the best part?

So what do you say - are you excited?! I know I am! And look who gave it his seal of approval: 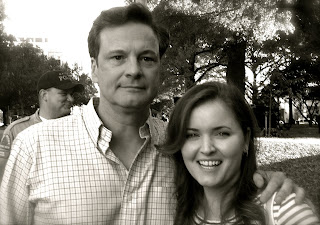 Okay, not really - but I like to think Mr. Darcy would be quietly pleased ;)

Now go forth and enjoy!

PS - Want to help spread the word? 3 random people will win signed copies of A TASTE FOR SCANDAL on Twitter today (04/01/13) - all you have to do is retweet one of my tweets that have the #AprilFunDay hashtag. Good luck!

Blurb:
It started with a kiss.

When nine-year-old Eleanor Abbington first met her uncle’s new stepson, Nicolas Norton, the boy rudely stole a kiss from her that set the tone for their contentious and competitive relationship. It wasn’t until years later when Nick introduced her to fencing that they finally had a proper outlet for their frequent arguments.

Having just emerged from mourning following her mother’s death, Eleanor is exactly where she wishes to be at the age of four-and-twenty: an on-the-shelf spinster and unofficial companion to her aunt. Unfortunately, her ambitious uncle has other plans for her future. On the eve of his house party, he lays down his ultimatum: either Eleanor marries the man of his choosing, or he'll force her seventeen-year-old sister to do so instead.

When Nick unexpectedly arrives on their doorstep after a two year absence, Eleanor is in no mood for their normal banter. Seeming to know exactly what she needs, Nick challenges her to pick up the foil once more. During their pre-dawn matches, he shows her just how strong she can be . . . and exactly how much he’s changed since leaving. But when her old adversary becomes her only ally, she may very well find herself . . . Ruined by a Rake.

And just because I can, here is an excerpt just for you :)

The swishing of razor thin metal through cool air soothed Eleanor in much the way harp music calmed the music lover, or fine wine pleased the connoisseur. In the early morning gloom, damp fog was her cover, the dim promise of sunrise her only light. She moved forward swiftly, danced backwards, and thrust again. Nothing but mist met her blade, though she couldn’t help but imagine her uncle’s chest at the end of her buttoned tip.

“Your form is terrible, cousin.”

Eleanor gasped at the sudden pronouncement, and swung around, her rapier extended. Nicolas’s smiling face was inches from her blade. He didn’t even have the decency to flinch, drat the man. “Even my worst form would be miles better than yours.”

Leaning back against the crumbing ruins of the old abbey wall, he nodded solemnly. “I agree wholeheartedly. Unless, of course, we are speaking of fencing. If that is the case, allow me to clear up your misconceptions.”

She didn’t relax. The way she was feeling this morning, she could happily take her meddling step-cousin’s head right off. “Sounds like a challenge to me. Have you come prepared?”

Though they used to meet frequently for these clandestine matches, it had been over two years since their last one. As much as he was a thorn in her side, she would be forever grateful to him for teaching her the sport. It had started as a lark, but had quickly evolved to their favorite form of communication, taking their verbal sparring and converting it into proper duals.

Stepping back, he whipped his own sword up to clang against hers, making an X of the two weapons. “But of course. I wouldn’t dare meet anyone at dawn unarmed, least of all you, dear Ellie.”

She rolled her eyes, sending a brief glance heavenward before meeting his gaze. His amused gaze. Of course. Everything was a game to him.

“En guard,” she commanded, planting her feet more firmly and extending her left hand behind her for balance. “And don’t call me Ellie.”

“As you wish, my sweet.” He paused for a moment, pursing his lips, then backed up a step. “By the way, I’m very sorry about your mother. I know I said as much in my letter, but it was a damn shame.”

She blinked, taken aback by his quiet words. Sincere words. Leave it to Nick to throw her off kilter.  She swallowed against the sadness that rose from deep within her, letting her gaze fall to the rocky ground. “Thank you,” she said, nodding twice before looking back up. “I’m very glad to have Aunt Margaret, at least.”

She smiled tightly, willing him to move on from the topic. This gentle side of him she kept catching glimpses of unnerved her. She didn’t quite know what to make of the changes she saw in him.

As if sensing her desire, he repositioned his blade, tapping it lightly against hers. “Shall we?”

“Do you think you can keep up?” she asked, lifting a brow in challenge.

Below his morning scruff, his lips curled in his signature grin. She let out a relieved breath—they were back on familiar ground. He knew it drove her mad when he gave her that self-satisfied smile, which meant he was rarely without it. “Now, do try to be nice. It’s been weeks since I’ve had a proper match.”

Before the last word had even left his mouth, she lunged forward, going straight for his gut. He flitted backwards, parrying her move and striking forward with one of his own. His foil slapped against her right shoulder.

She gritted her teeth, not so much against the sting of the hit as the sting to her pride. He was toying with her, damn him. “Two years in the militia and that’s all you’ve got?” She tsked as they both got back into position. After the awfulness that was last night’s dinner, this was exactly what she needed.

“Taking it easy on an old gal like you.”

“Old gal? I’m all of two years older than you, thank you very much.” She engaged him once more, darting forth with lightning speed and poking his ribs with a sound thump.

“Ow,” he laughed, slapping her foil away with his own. “Careful, that’s tender young flesh. You’ve likely forgotten how delicate youthful skin can be.”

She bit her bottom lip to keep from grinning. He was always such a pest. For that little quip, he earned himself a slap across his gloved hand. “Sorry, did that hurt? You’re right; I can hardly remember what such a hit feels like. Though it’s less from my advanced age and more from a lack of a proper opponent.”

“Ah, you’ve missed me. Should I come home more often then? Clearly you are in want of my company if it is a proper opponent you seek.”
Posted by Erin Knightley at 12:20 AM