At Which Time, Reason Ceased to Exist

Welcome to my blog. If you don’t wish to be charged for this experience, please leave a comment with the word “stop.” Otherwise, by closing this window, you agree to be charged $9.99 a month for the next 82 years, transferable to your heirs upon your death. Thank you, and have a nice day :)

If I were a premium messaging blog, that would be how I would operate, as I discovered this week when my cell phone bill came to me. On Feb. 13, I received an unsolicited text from 40544, essentially saying the same thing as the above paragraph. Not wanting to engage the spammers in any way, shape, or form, I deleted it.

The next morning, I received another text with some totally worthless, idiotic trivia tidbit. I promptly called Verizon and asked them what to do. The rep told me he could block them so they could no longer send me messages.

Until I got my cell phone bill today. Wouldn’t you know, there was the $9.99 charge for the premium IQQuiz text service. I called Verizon again, letting them know that the charge was in error.

“No ma’am, you must have agreed to the charge. The block will keep them from charging you again, but you still have to pay them for the first month of use.

Um, what? I calmly explained that I never agreed to anything. The text was totally unsolicited, and I had promptly deleted and blocked them. And here is when things really started to go downhill.

“Did they say in their initial text that if you did not want to receive the texts, to text back the word “Stop?” she asks.

“And did you text them the word “Stop”?

“Er, no. I called you guys instead. I didn’t want to engage them in any way for fear that I would end up on every spammer’s text list.”

“Well, by not texting them back, you agreed to their terms, and therefore can be charged.”

I looked around at the exploded pieces of my head, wondering how I would ever put it back together again. “That is insane. By NOT responding, I somehow agreed?” Righteous anger bubbled up within me. They couldn’t possibly be serious.

“Yes ma’am. But you’ll only be charged for the first month, since you called and had them blocked the next day.”

Oh, well then—so long as it was only the first month I would be charged for. No problem! NOT. (and yes, I am totally evoking my child-of-the-80’s privilege here to resurrect that particular saying). Me, grinding my teeth: “That can’t be legal. I never AGREED to anything. The absence of a negative does not make a positive.”

“I’m sorry, ma’am, but it is legal. And you are actually lucky; it is much better than it used to be. Some people are out way more money than just ten dollars.”

Shaking my head in utter disbelief, “So this happens a lot, does it?”

“Every single day,” she replied cheerily.

Honest to God, I have entered the Twilight Zone. If this happened to good, honest customers every single day, wouldn’t Verizon want to do something about it?? “Well, legal or not, you’re going to have to take that charge off, because I called to report it first thing, and it was blocked.”

“We can’t credit you, ma’am, since it is a third party charge.”

Steam began to build up in my brain, threatening to shoot out of my ears like the billowing clouds emanating from the Hogwarts Express locomotive. “I don’t even know who the third party is! The only contact I ever had from them was the text, which I deleted.”

Google them? Google them? GOOGLE THEM? If I could have reached through the phone like Bill Cosby in Ghost Dad and throttled the woman, I would have happily done so. At this point, I may or may not have lost it. Let’s just hope they weren’t recording the call, lest it surface on the pages of TMZ when I am rich and famous.

She was adamant that it was not their responsibility. I was adamant that their policy sucked worse than a Dyson on steroids. I was this close to canceling my contract with Verizon, at significant personal cost, when I used my last best hope for reason. “Well, if it was my responsibility to stop this on my own, WHY didn’t the Verizon rep that I called for help say as much? I am ignorant in the ways of text charges, where as you guys are supposed to be the experts. Would you like his name?”

After a big sigh (we had been going at it nearly 10 minutes at this point), she finally relented. “All right. I will credit you the amount just this once. It is against our policy since we still have to pay the third party company.”

Oh? Allow me to make a suggestion to the powers that be in the lofty upper ranks of Verizon. If you’d like to recoup the losses you’ve sustained by having to refund fees to unsuspecting clients, and since you clearly have no problem with the non-agreed-to agreement, why don’t you draft a letter to the lovely people at 40544, telling them that you will be charging them a $10,000 monthly rate, in return for sending them a daily text telling them what a crock of {insert expletive} they are. If they wish to void the service, they merely need to text the word “STOP” to every single Verizon customer they have scammed over the last decade.

In the mean time, I will be drafting my own letter:

Dear Verizon Big Shot, I will be taking ownership of your mansion and everything in it as of tomorrow. If you would like to stop the transfer of ownership, please text the word “stop” to my cell phone within 30 seconds of receiving this notice. If you need the number, please feel free to Google it. Thanks, and have a great day!

Am I the only one who has ever experience this type of utter nonsense? Please tell me your crazy customer service experience, so I may commiserate. We shafted folks must stick together!

You know what I need? Chocolate. So, here is the fun Regency recipe that I came across in my research last month. Yummy, simple, and the perfect thing to whisk away all the modern day trials that raise our blood pressure :) 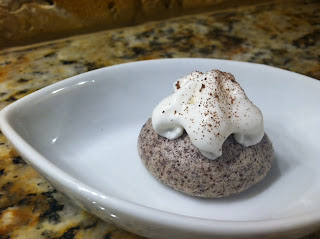 Beat the egg white until stiff peaks form. Add the sugar and grated chocolate, beating until well whipped and fully incorporated. Dollop the mixture onto a parchment paper-lined cookie sheet by tablespoons, leaving room for spreading in between each puff. Bake at 225 degrees for an hour 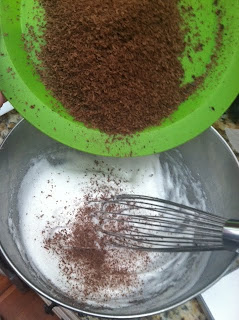 I did mine Regency style - hand whisking with the best of them!