A Walk in the Woods

Nine years ago, when Kirk and I first moved to Raleigh and we were still poor, starry-eyed newlyweds, we stumbled upon a little-known spot on the city’s reservoir where we could truly get away from it all. We didn’t have a boat, or even know anyone else who did at that point, and this perfect little place could not have been a better find for us.

There wasn’t a beach or a parking lot or anything remotely organized there, just a dead-end street with a long, snaking trail leading through the woods and popping out on the main lake some half-mile later. Another trail wound around the peninsula, giving us the option of hiking for miles if we wanted.

Our first fur baby was still little more than a puppy, an exuberant one-year-old who had never seen such a glorious expanse of woods, nor experienced the soaring freedom of leash-less living. She bounded through the forest, crashing through underbrush and leaping over logs. Many a squirrel was treed by our lightning-fast Sadie, each holding her attention for a frustrated minute or two until she relented and sprinted off to the next great thing.

As Kirk and I hiked the well-laid trails, Sadie explored the wildness extending beyond the beaten path, crisscrossing in front of us just enough for us to know she was still close by. Occasionally we would linger on the shore, soaking in the sun and listening to the quiet lap of water caressing the rocky beach. It was here that our little rock-hound discovered her obsession, watching us with laser-like focus until we threw the next rock for her, and then the next.

Soon, we added Maggie to our little clan, and the trips to the trail doubled in fun. Black lab Maggie could hardly believe her eyes when the trail opened up to the expanse of shoreline, and she happily frolicked and played like the pup she was. On the way back to the car, she and Sadie would dash in and out of the woods, somehow perfectly capturing the look of carefree joy, tongues hanging from their mouths as the wind ruffled their fur. 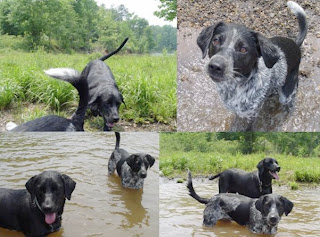 And then we finally bought our first boat, and the trips to the trail became less frequent. Instead of hikes to the shore, we could finally have our fun on the water, wakeboarding, swimming, and surfing until our hearts were content. The girls remained behind those days, their faces watching forlornly as we pulled from the driveway without them.

About five and a half years ago, we found our current home, and they once again knew the joy of frolicking out doors. Unfortunately, we still lived in a neighborhood, so they had to keep their wandering down to a half acre or so. Though they ran freely though the back yard, they never quite recaptured the same verve for life they had discovered in the woods. Every fall, Kirk and I would think of the old trail, of that special place where freedom lived. With the lake behind us, it just didn’t make sense to pack up our now three-strong pack of pups and drive the near hour to the reservoir.

But something occurred to me this past Sunday morning. The drive was never going to get any less. Either we made the priority to go or we didn’t; we couldn’t just keep saying, ‘but it’s so far.’

So, we pulled out the old towels, packed up water bottles and leashes, piled our three eager and slobbering dogs in the car and headed for our place. It had been so long, even the roads themselves had changed, and we had to google the new route as we drove. Fifty minutes, a few quick stops, and a whole lot of dog breath later, we were there. Despite the changes going on only a mile away, the dead end street was still the same—exactly as it had been half a decade earlier.

The air was crisp and cool, the delectable smell of autumn heavy in the air. Sadie and Maggie cried with impatience as we untangled their leads and prepared for the hike. As always, we hiked the first quarter mile with them on their leashes. They strained and pulled, their noses lifted to the air and their bodies quivering with energy. Little Darcy had never been here, but she sensed her sisters’ excitement and shook with the thrill of it all.

When we found the right spot, we made them sit, poised to unclip their tethers and set them free. In that moment, I eyed Maggie’s graying muzzle and Sadie’s clouded eyes. Our girls were getting old, and seeing them in the place of their youth suddenly drove home the truth of it. We’d let way too much time march by, depriving them of this special place with a thousand little excuses.

It had been years since Sadie had let loose and really ran, would she still have it in her? Maggie played in short bursts with Darcy in the backyard, but what about a two hour romp through the woods? Would she be able to keep up?

The world seemed quiet in that moment, as they all sat and waited. At last the scrape of metal on metal met my ears as Kirk unclipped their leashes…and then they were off.

Like the puppies they had once been, they streaked through the underbrush, soaring over the land so fast I marveled that their paws even touched the ground. As Kirk and I smiled and began our hike along the old familiar path, we listened to the rustling of foliage and the pounding of feet as they whisked by, zig-zagging back and forth just as they did so many years ago. 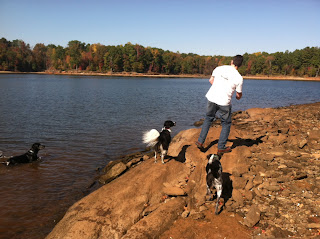 When the light began to wane and the crispness in the air turned to nippiness, we at last made our way back to the car, not even needing to clip the leashes to their collars. They were spent like a trio of 5 year old kids after a particularly spectacular Christmas—happy, exhausted, content to be by our sides. As we packed them up and started out on the long track home, I watched the trailhead diminish in the sideview mirror, growing more and more distant as Kirk drove onward toward home. I felt somehow . . . grateful. Grateful to have rediscovered this place, grateful to have given my pups a day of pure joy, grateful to have reawakened the memories of how things used to be.

Sometimes the greatest joys in life are the simplest ones, are they not? A quiet wood, a long empty trail, and the company of those we love is all it takes to make a perfect day become a perfect memory—one I hope we will repeat with much more frequency from now on :)

Is there a place you love to go, that reminds you of who you were and where you’ve been? Do you make time to visit, or has it been a while since you’ve been back?

In honor of our trail adventure this weekend, I thought I would do a Trail Mix inspired muffin. The original recipe is here.

Posted by Erin Knightley at 1:39 AM