Sometimes the greatest things happen when we let go of our crutches and face challenges head-on. Oddly, I am put to mind of the experiences I had when I was nineteen, when I went to Russia for the summer to work on an international scientific drilling project near Lake Baikal. We—the two other students who worked in the paleoclimatology lab and me—arrived in Moscow a bit timid and a whole lot of excited. We were to have a two day layover before our flight to Irkutsk, and we intended to make the most of the time, seeing all the sights with the help of our guide Sasha. 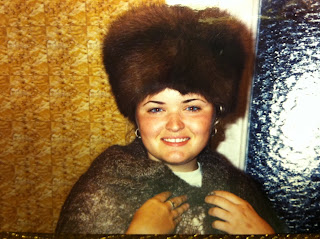 Russian Erin - or Erina as I was called :)

On the morning of the first day, Sasha collected us bright and early from the dank and wholly unluxurious youth hostile we had all slept rather poorly in our first night. We had been shocked when the sun didn’t set until near midnight, and then reappeared a little after four in the morning, complete with loud, obnoxious birds heralding the start of the day. Despite our exhaustion (and the mystery-meat breakfast we consumed), our enthusiasm for the day was palpable, and we followed behind Sasha like three adoring puppies.

On a speedwalk tour that would have done Richard Simmons proud, Sasha showed us one thing after the other, zooming past historic buildings, enormous statues, and lovely greenways. For each sight he had a bit of description, some small piece of history or note on the architecture. He even gave us a speed tour of the art museum, squeezed in between grabbing blinis and glimpsing a street bazaar.

As the afternoon progressed, Sasha decided we should see how the metro system worked. With we three bedraggled Americans trailing behind, he ducked into the nearest stations and showed us how to buy the tokens. Popping a few into the slot, he motioned for us to go through the one-way turnstyle. We did as we were told, obediently pushing through single-file. Once we were all on the other side, we turned back to wait for him to follow.

Instead, he held up a hand and saluted us. “Okay, have fun. I’ll see you tomorrow afternoon.” And then he left.

The second we realized he wasn’t kidding, we tried to find a way to follow, but the exit was on the other side of the terminal, and Sasha had already vanished into the crowd. We looked to each other with widened eyes, identical looks of panic within their depths.

In a foreign city.

With no grasp of the language. Or money system. Or even the laws.

And no contact information for anyone in the whole country. Make that continent.

We had two choices. We could find the exit, hail a cab, and point to the map that had the youth hostel circled on it. We could hole up in our rooms, bemoan the fact we had been abandoned, and forget about the truly important sights we had not yet seen: The Kremlin, Red Square, and Arbot Street.

Or we could strike out on our own. We could pull out the map, try to make sense of the foreign words and pictures, and find our own way. Or… possibly get so lost we ended up with our passport pictures plastered on the side of kefir cartons everywhere.

After a quick powwow, an agreement was reached: It was time for adventure. I pulled out the city map I had tucked into my bag earlier, and we poured over the rainbow of tiny lines delineating the metro system. Before long, we started making sense of the map, matching the queer words and symbols with the ones on the signs in the metro. Once we decided on a plan—two transfers to reach the station nearest the Kremin—we stepped onto the escalator and descended down, down, down into the impossibly deep depths of the metro system. When at last we reached the platform, we could hardly believe the scene before us.

Like an impossibly gorgeous set piece from one of those sweeping old Hollywood movies, the station platform stretched before us in all its gilded glory. Exquisite chandeliers hung elegantly from the high, arching ceilings, their glittering light filling the open space like a ballroom hung with countless blazing candles. Marble gleamed beneath our feet, climbing the walls and paving the ceiling in an opulence unlike anything I had ever seen.

It was surreal, as if we had stepped into a fairytale, lacking only in elaborate costumes to bring the masquerade to life. Instead, ordinary people in t-shirts and business suits flowed past us like water parting around a time-worn boulder in a swiftly moving river. It was oddly hushed, as if they too understood the need for reverence in this unreal place.

We made our way to the train, which was filled to brimming with busy Russians. The smell of undeodorized bodies in the close space was incongruous with regal platform outside the windows. I had never been on a subway train in my life, and here I was on one in the very bowels of Russia, surrounded by people who smelled, looked, sounded, and acted differently than anything I had ever known. I had never felt farther from home in my entire life, from anything at all familiar. When at last the doors opened, we bustled out and headed for the signs pointing us to the next line. We took yet another escalator even deeper into the earth, if that was even possible, then traversed a long tunnel toward the platform.

Again, no one around us spoke, and we silently trekked over the tiled floor, exchanging glances at the strangeness of the place. In the distance, the soft, smooth sounds of a lone flute broke the silence, calling us forward like a siren’s song. The notes were dark and low, purer than any I had ever heard. As we drew closer, the haunting tune grew louder, each poignant note clear and melodic, caressing us like dark velvet on a winter’s night.

It was beautiful, and hypnotic, and I could no more ignore the desire to fill the purple-lined flute case with the flash of silver rubles than I could deny myself the need to breath. He earned his money that day. Thirteen years later, I can still remember that moment as clearly as if it had been yesterday.

The other two platforms were every bit as beautiful as the first, though the styles were different. In one, huge painting drew the eye, framed by intricate stone carvings. The lighting was different here, with large fixtures dotting the ceiling. The other had walls done entirely in mosaics, breathtaking in the grandness both of scale and design. When at last we rode the seemingly unending escalator back to the surface, it was jarring to return to the noise and pace of the city above. 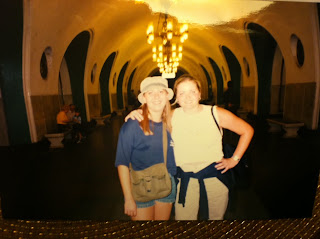 One of the less ornate platforms :)

We spent the day exploring the Kremlin, glimpsing Lennon’s tomb, and marching through the Red Square. We marveled at the brightly colored, iconic roof of the cathedral and pictured the imposing armies that had once filled the huge space. Next we found our way to Arbot street, and were relieve to discover many of the vendor’s spoke English. We haggled for the first time in our lives, buying silly trinkets and priceless baubles alike.

By the end of the day, we confidently strode back through the waiting turnstyles of the subway, willingly plunging into the earth once more. When we finally arrived back to the hostel, it was with a sense of accomplishment. When abandoned by our guide, we had boldly moved forward to explore our surroundings. Because of it, we experienced things we never would have had we stayed by his side, or retreated to the hostel. We had found beauty and wonder in this foreign place, intimidated no more by the strange symbols making up their words. We had laughed, we had seen, we had made memories for a lifetime.

So, what has me thinking on this experience from so long ago? I’ve decided that, for a little while at least, I need to let go of my crutch and move forward. I’m referring to the internet—and the hours and hours that can be wasted each and every day as I interact with friends and writers on the Yahoo loops, Twitter, and Facebook. I always want to be up to date, to know what’s going on in the industry. I spend so much time exploring what others are saying, I’m starting to loose my own need to create. So, I’ve decided that for the next six weeks, I’m going to turn off my wifi for a minimum of 8 hours a day, and go about the business of exploring my imagination. Who knows what sort of beauty lurks there if I never completely unplug and allow myself to find out? My ultimate goal is to finish the revisions for Book 2 a full two months ahead of schedule.

No dogs, no email pings, no tweets or news updates. No sneaking a peak at celebrity gossip or getting sidetracked by funny pictures or facebook statuses. No obsessing about when genre is selling better and why. Just me, my story, and endless possibilities. Wish me luck! (And yes, I will still be blogging as usual)

Click Here for some gorgeous pictures of the Moscow Metro :)

In honor of my recently unearthed memories of Russia, I found a wonderful recipe for blinis—otherwise known as Russian Pancakes. Much like crepes, they can be filled with anything from sweet (berries, chocolate, honey) to savory (ground meat, sautéed vegetables, cheeses). I had a lot of fun making them – and I hope you will too! 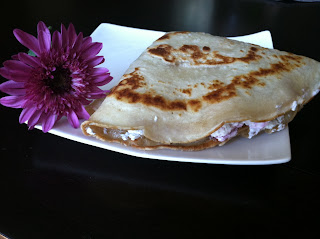 Click Here for the allrecipe.com recipe :) I’d make it my own except…I don’t want to! They are perfect as presented. My only tip is to use lemon juice for the citric acid. For my experimental blinis, I had a berry and whipped cream version for a post lunch dessert, and a ground turkey with spicy tomato sauce for dinner. Both were equally fabulous, if I do say so myself :)
Posted by Erin Knightley at 1:15 AM