The Ending of an Era

Eighteen years ago, I was a young, fresh-faced freshman in high school, worried about boys, cars, boys, and what I would do that Saturday night. And boys :) I worked at Little Caesars Pizza (constantly getting in trouble for making pizzas the way I wanted them, not with the militantly rationed toppings they wanted us to use), I had no idea what I wanted to do with my life (I knew it would involve water one way or another), and I couldn’t believe my parents had the audacity to tell me what to do.

I was a fashion disaster, no one had ever told me what hair product was (hence my brother’s nickname for me: Bushy Haired Cave Woman), and I hadn’t a clue who I really was as a person

Back then, the internet was a new-fangled mystery to me, cell phones were few and far between, and I had never even heard of a Starbucks. Grunge was in, Richard Gere and Cindy Crawford were voted the sexiest couple alive, and Justin Bieber hadn’t even been born yet.

It was the spring of 1993, and I’ll never forget when my sister brought home her two new little kittens, Rush and Indy. Rescued from inside the wall of a barn, they were tiny and inquisitive, their little heads swiveling to take in their new surroundings. They were so stinking adorable, we could hardly keep our hands off of them. They were nearly identical in color, both silky black with white chests and paws, and both had large, luminous yellow eyes. The biggest difference was that Rush was a big, fluffy furball, while Indy was sleek and streamlined. 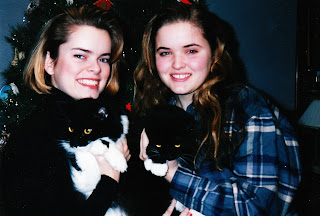 Over the next few years, I got my driver’s license, met my future husband, and graduated high school. The summer before I left for college, my sister moved to California, and the cats moved in with my parents. Whenever I returned from school over the next four years, they would always be under foot—Indy inquisitive and adventuresome, and Rush just wanting to be pet.

In 2001, I graduated college and Kirk and I were married two weeks later. Wanting to fill our new (exceedingly tiny) home with love and warmth, we agreed to take the cats from my parents. When we returned to KY after our honeymoon, we packed up the car, put the cats in the carrier, and listened to them yowl the whole 500 mile journey to South Carolina. 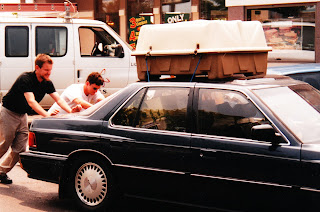 The cat carrier in in the back window. (Yes, that's my brother and Kirk pushing our dead car in the Arby's parking lot, lol!)

Those first few months are some of the happiest in my entire life. Each morning I would wake up to my husband—and two randomly situated cats on the bed with us. With our meager, fresh out of college and just married funds, we bought them a little cat perch, and they spent hours on end staring at the front yard and all the birds and squirrels therein. During that time, we learned the reality of dealing with litter boxes, vet bills, and buckets and buckets of cat hair. We weren’t cat lovers in general, but we certainly liked these two. They were low maintenance and had spent much of their time grooming or cuddling with each other. 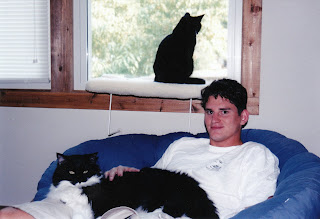 Kirk looks like such a baby, and we were married at this point!

By the end of the year, we were able to get our first dog, and they learned to deal with little Sadie in the tiny space. After months of close quarters—during which time Sadie grew to twice her size—we finally moved to a townhome that offered twice the space, and everyone was happy. With the tiny fenced in patio, we were even able to keep the door open, allowing the animals to sun on the patio. 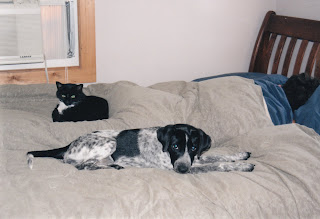 When Kirk got his first job offer, we packed up and headed to our new life in North Carolina. I have such wonderful memories of buying our first home, wandering from room to room in wonder of the fact it was ours. The cats loved this house because of the proliferation of long, full length windows letting the light to pour in, allowing a view of anywhere in the yard they cared to watch. 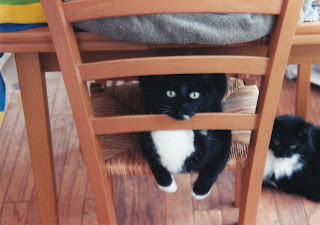 Soon, our black lab Maggie joined the bunch, and the cats took more to themselves. We coexisted for years in that house, while I changed careers, we got our first boat, and actually started earning enough money to decorate the house. We were growing up, with a mortgage, car payments, and the occasional date night.

Before too long, we decided to move out to the boonies, where it was 15 minutes to the nearest store, but the lake was in our backyard. After the move, the cats spent much of the time holed away, none too happy about losing their floor-length windows and busy street to watch. It would be a year before I screened in the back porch, and they forgave us as they soaked up the sunshine and watched the world go by. The call of the wild was too much for them, and many times they’d run for freedom when we opened the door, and we’d have to call the familiar, melodic refrain, “Here Rush, here Indy, here Rush!”

When they returned, they would be dusty, with fur smelling of leaves and that unmistakable air of lionlike pride glinting in their amber eyes. We’d chastise them and tuck them back inside, but it wouldn’t be long before once more we’d have to call to them. 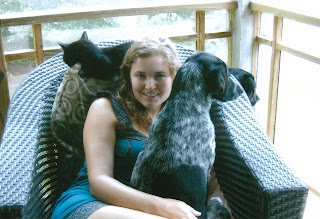 Two years ago, we decided that we would make them indoor, outdoor cats if they wanted to be outside so badly. A month later, Rush was attacked by some unknown animal, and after a two week fight for his life, we had to say goodbye to our sweet, cuddly fluffball. 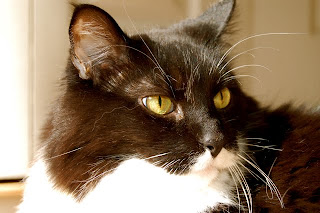 For the first time in his 16 years, Indy was without his brother, friend, and playmate. We tried to fill the void, but he’d never been a people cat, and he stayed mostly to himself. Finally, after a month of loneliness, he joined us one day in the living room, and curled up beside Maggie. Maggie gave a warning growl, the low rumble menacing and fierce, but Indy simply ignored it, and Maggie eventually gave up and went back to sleep with a sigh. 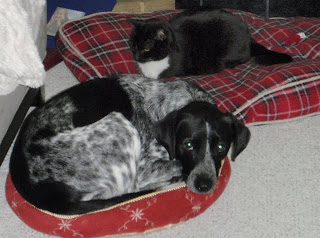 Sadie chose the cat bed over sleeping with Indy 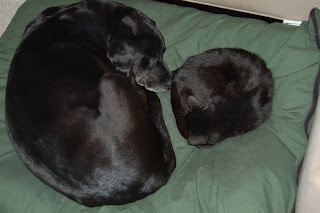 Maggie gives up and lets Indy join her

That incident set the tone for Indy in the house – ignoring us most of the time, slipping in beside us some of the time, and running through the house with random bursts of energy when we least expected it. Despite his age, he was always jumping and running around, looking and acting exactly like he did when he was three. Every now and then I’d pick him up, hold him to my chest, and stand at the window, cuddling him until he pushed away. Sometimes he would let me hold him for up to a minute, which was progress.

And then, this week, things suddenly changed. He no longer was waiting for the bedroom door to open, only to be chased by Darcy as was inevitably the case since our newest addition joined us in August. He no longer meowed indignantly for food at the end of the night, or tripped me in the bathroom on his way to jump in the tub after my shower. I plied him with all sorts of different foods, none of which enticed him, and he would only drink if the water was dripping from the faucet. For the most part, he curled up on the dining room chair in the sunshine, and simply slept.

Knowing what may be next, we made a vet appointment for Saturday. Friday I held him, and though I was happy he let me, it worried me all the more—he was not a cat who liked to be coddled. Friday night I laid him gently on the bed, something we haven’t allowed of any of our animals for years, and let him sleep between us. He was quiet, but then again, so were we. He curled in a small, black ball and stayed there until I woke him the following morning.

When we prepared to leave, we took him outside and let him soak up the gorgeous sunshine, his amber eyes blinking and taking in the trees and the clouds and the rustling wind. At the vet, the doctor shook his head, and we said our goodbyes.

Later that day, we buried him beside his brother, in a sunny patch of land overlooking the woods and the water. I laid on the grass and watched my husband dig, thinking of how much of my life Indy had simply been there. Not lovey, not overly fussy with us, just around, watching our lives as he lived his. From teenager and kitten to a woman and her cat, he was my companion for nearly two decades, and I was his person. 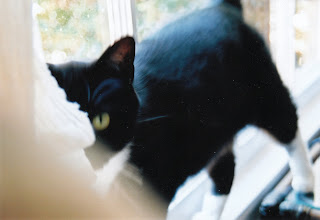 Posted by Erin Knightley at 8:15 PM