First off, I thought I’d let my cake readers (that’s you!) know that I found out this weekend that my first manuscript, More Than a Stranger, is a finalist in the Show Me The Spark writing contest. Yay! I’ll find out the final results in a month. Okay, on with today’s post :)

I’m getting the itch. No, not camping, that was last time. I speak now of… the Travel Itch. On Friday, while I was supposed to be writing the next best seller, I was on Travelocity pricing plane tickets to Rome for January. Yes I know, that was the sort of thing we did when I had a paying job, but the pull was so strong, I threw prudence to the wind and spend an hour trying to figure out the best week for the best possible price. In the end, I gave up the search, but I hope to head to places unknown sooner rather than later.

I do so love to travel. Growing up, I used to label myself as a ‘wandering soul,’ always looking toward the horizon and all the endless possibilities beyond it. As a child, though I didn’t travel frequently, my range was pretty impressive. By high school I had been to both the Atlantic and Pacific coasts, up to Montreal, through New England, all over the south, the Midwest, and the southwest.

My goal was to hit all 50 states by the time I’m 50, but I have fallen a bit behind, having so far only been to 29 states. I plan to make up the difference with one spectacular road trip sometime around the age of 45, possibly in one of those lumbering behemoths otherwise referred to as an RV. That way, I can say I’m camping and still have a tangible barrior between me and the suicidal wombats on the prowl. As for the rest of the world, well, as a teenager I put together a list of the places I would like to visit. I may have been a liiitttlle ambitious when I listed Antarctica (I thought I would be a famous researcher, after all), and I have yet to see the sands of Egypt, but other places like Russia and the Caribbean came to fruition.

As a matter of fact, after my freshman year of college, I spent an entire summer in Irkutsk, Russia (yes, we’re talking Siberia, here) working with an international drilling project. As fresh-faced nineteen year olds—without the benefit of Google Earth or Wikipedia—we were wholly unprepared for the culture clashes that would arise on that trip. We were also unprepared for the wonderful, lasting friendships we made, or the lifetime of stories we still laugh hysterically at even today. In fact, every time my friend Jacob and I get together, at least one good Russia story makes it into the conversation. One of these days, I will have to write a blog about the whole experience; I’m fairly certain it will become a classic, if I do. 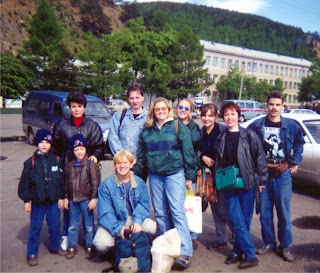 Near Lake Baikal, Russia. Us three Americans with our Russian friends (so glad my fashion sense improved with age!)

At the end of the trip, I felt changed, as well as both appreciative and dismayed of my life in the US. It impacted the way I looked at myself, my country, and my world. It also made me very glad that dried, salted sardines are not an item often found in my local grocery stores. Bleck, I swear I can still hear the crackle of their bones as our comrades availed themselves of that particular snack. *shudders*

I think it was because of my awesome experience in Russia that I learned to really appreciate the local character and flavor of any given place on earth. On our honeymoon, Kirk and I stumbled upon a beach that was populated only by locals. We ducked in to the little open air honor bar, helped ourselves to Cokes from the fridge and dropped dollar bills into the cigar box on the counter. We talked for hours to some very interesting characters, and posed for pictures on the rusted out old Cadillac the queen was driven in the one and only time she visited the British Virgin Islands. That day was one of our absolute favorites of the whole trip.

In 2007, when my sister and I went to England and France, we had the time of our lives. Why? Because we talked to people! Frolicked like children through parks and museums, got random strangers to pose with us in pictures, then in turn were asked by random strangers to pose in their pictures, made a French cabbie blush one day, and another one gave my sister a foot massage the next (I swear that is totally true - and yes, it was even creepier and more hilarious than it sounds!). 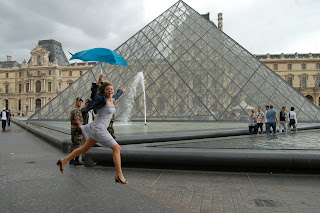 Outside the Louvre, Paris, France

We had locals offer us tips on great tourist spots, and got sulky Parisian teenagers to pause in their brooding long enough to crack a smile and give us directions. Oddly enough, apparently either my sister or I look like someone famous in France, because we were actually followed by an honest to goodness paparazzo at the Louvre. I do feel bad for the guy – a whole day wasted snapping picks of to random chicks from the States. That was when it clicked that some of the people asking to get their picture taken with me earlier that day may have thought I was something special. Sorry, guys! 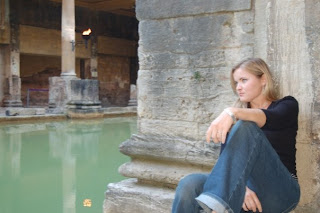 Last year, when my husband and I went to Rome for my birthday, we walked nearly the entire city in less than a week, absolutely in awe of every square inch of that place. It was January, and we just about had the whole city to ourselves. The weather was lovely, in the 50’s the whole time, and we just wanted to soak in everything and everyone around us. The ancient connections to the past are actually tangible there – buildings and columns and monuments you can actually touch. 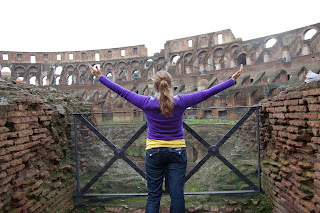 We stayed in a tiny bed and breakfast, which ended up just being a room a couple rents in their 16th century apartment. 16th century!! And what’s more, it had been in Luciano’s family for three centuries. By staying with a kind-hearted local, we felt as though we were visiting a favorite uncle, someone who wanted nothing so much as for us to get as much as possible out of our visit. Seriously, if you ever need a place to stay in Rome, be sure to send me a note.

So, yes, the bug has bit me again, and after a year and a half spent languishing within my own country’s borders, I am just itching to go somewhere new and spectacular. Top on my list? Scotland and Italy! It’s a good thing I have planned for my upcoming books to feature scenes in these countries. Now, I think it is high time I head out on a business trip, don’t you?

Are you a traveler? Do you itch to travel the world over like I do, or do you prefer staying closer to home? Where do you want to go next?

This week's recipes features an improved version of the very first recipe I posted on this blog...

Apple Pie! This week, my friends and I made this pie using farmer's market honeycrisp apples, and lord have mercy, was it good! I hope you will give it a try. Feel free to substitute pre-made pie crust for homemade. 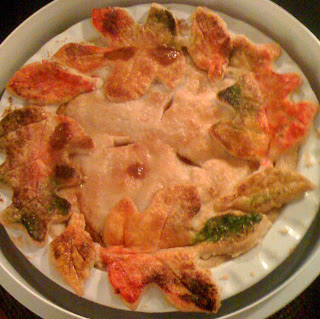 Combine the flour and salt, mix. Add shortening, and cut into flour using a pastry knife or two regular knives until mixture resembles coarse, pea-sized crumbs. Add water a little at a time, stirring with a fork until mixture clings together. Taking care not to over mix, divide the dough evenly and shape into 1 inch thick disks, wrap with plastic wrap, and place in refrigerator for 15 minutes.

Pull dough from fridge, sandwich between either 2 large pieces of plastic wrap or parchment paper, and using a rolling pin work until large enough to cover the bottom of a 9 to 9.5 inch pie pan. Peel away to top piece, then invert dough into pan and peel away remaining piece of wrap/paper. Adjust to fit pan without stretching, making sure no air bubbles are trapped at the bottom.

Work the top piece of dough the same as the bottom piece. Place over filling, crimp bottom and top pieces of dough together, and cut steam vents into the top. For a shiny crust, beat an egg and brush it over the dough, sprinkling with sugar if desired.

Place on a cookie sheet to catch overflow, and place in oven. Bake 45 to 50 minutes

Posted by Erin Knightley at 1:23 AM