When I am an old woman, I shall wear purple.
Okay, so maybe not purple – for me, I think it would be electric blue, but you get the point.
This week, my sister and I cared for my 85 year-old Nana so that my parents could enjoy some much deserved time away for their anniversary. Nana is super short, with perpetually red hair, an endless cache of clip-on earrings, and bright blue eyes. She is ridiculously healthy given her lifelong love of coffee and sweets—to the exclusion of healthy food, not in addition to—and only began using a walker a few years ago.
As Kara and I fussed and fretted over her this week, I couldn’t help but wonder what sort of person I will be when I am older. How much of ourselves do we bring into our winter years, and what are the parts of us that will change.
I have known many elderly people in my day. Okay, not really. It’s not as if I go skipping through the nursing homes or hang out in the shuffleboard cheering section (Go Mortimer! Kick Ernie’s behind!).
But I have known enough to gain a model for how I would like to be in my old age. There are three things that stick out in my mind.
The first is physical vibrancy. Do you know why most elderly people are so weak? Because they stop moving! Study after study proves that working out throughout our lives—even into our old age—is what keeps the body healthy. Take William Shatner for example. William is 79 year old. What?! Yes, good old Shatner, purveyor of PriceLine and provider of decades of entertainment from impersonators is a hale and hearty 79.
You may be asking yourself how it is that I know Cap’n Kirk is hale and hearty, and while I have never met the man, he did slow dance with my brother-in-law, and I have it on the best authority that he can dip a 6+ foot tall man with the ease of Fred Astair wooing the late, great Ginger Rogers in the good ol’ days. And let me tell you, Ryan ain’t no Ginger (sorry, Ryan, but it’s true!). Now, if a near octegenarian can pull off the dip and keep on dancing, than who’s to say that I couldn’t at the same age. 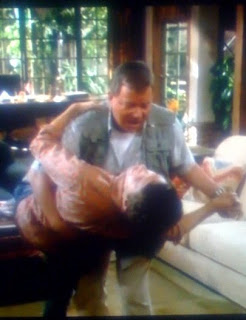 Oh, I know what you are going to say: You are a woman, you could never pull that off. Well, let me tell you a little story.
Three years ago, my sister and I traveled to England to spend a week abroad. As I have already talked about, I have a passion for perfect packing. For the entire week trip, during which we visited London, Oxford, Bath, and even Paris, I had one small rolling bag and a large purse.
My dear, sweet, tiny sister, however, had three pieces of luggage that together amounted to about the size of a car. A mid-sized car, at that. She had a backpack larger than she was, and if she tried to stand up straight, she soon would tumble backward like helpless red-shelled turtle. In addition to that, she also had a purse, and a rolling bag roughly equivalent in weight to a baby elephant. 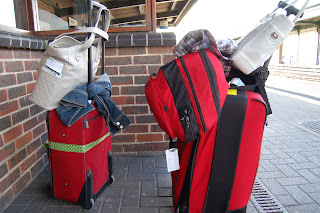 My bags ..... Kara's bags
Here I am, thinking myself very clever indeed, rolling around with my smart little bag and purse. In reality, it merely opened me up to serving as Kara’s sherpa for the whole of the trip. She may be older (that’s right, sister-mine, I said it!) but I am definitely the larger—and stronger—of the two of us.
As we prepared to board the train from Bath to London, we sisters, for absolutely no apparent reason, were hit by a case of the giggles. I threw my luggage aboard, then turned around to help Kara. I was able to get her gargantuan backpack, but when I tried to help her lift Dumbo, we both were struck down with the nonexistent hilarity of the situation. Weak with laughter, we desperately heaved and hoed, completely impotent to lift the monstrosity between the two of us.
As the passengers piled up behind us, the little old lady behind Kara, who bore a rather striking resemblance to the Queen Mum, briskly approached, grabbed the handle, and swung the whole thing up in one great heave. “There we are, then,” she said in her crisp British accent, brushing her hands and boarding the train matter-of-factly.
Kara and I stood paralyzed, slack-jawed in amazement that this white haired, seventy-something year-old stalwart English gentlewoman had just out-hefted the two of us. Combined. To this day, it is one of my all time favorite stories to tell, particularly when I can pantomime her marching up, snatching the bag, and tossing it on board.
I want to be like this British bruiser and our own William Shatner. Vibrant and healthy, strong and continually in motion, it is keeping up with our bodies the best we can that will keep us young.

The second is mental acuity. Much like exercising our bodies, it is vital to exercise our minds. Though my own Nana may be lacking in the physical exercise department, she puts most people—including myself—to shame in the mental exercise department.
Her workout of choice? Reading. It starts with the morning paper, which she reads straight through from beginning to end. After packing away a cup of joe or two, she moves on to novels. Buckets and buckets of novels. After a couple of hours of reading, she loyally watches Judge Judy (whose average viewer age must certainly be somewhere between Dick Clark and Father Time), before tuning in to whatever sports show is on, picking up her book once more when the game sags.
Before Mom left, she took us girls to the library to return the read books and get a fresh supply. As I hefted the bag from the car, the fabric straining beneath the weight of its contents, it occurred to me that Mom had said a couple of week’s worth of books. Seriously?! At least 10 large-print, hardback novels filled the sack.
As we combed through the library’s bountiful selection, I was amazed by how many Nana had already read. It was hard work finding new, non-violent, non-romantic (ahem), Nana-worthy books. It was most certainly a labor of love, one which my time-strapped mother frequently performs. But the results of the work are truly wonderful: having an active mind and voracious reading appetite at the age of 85 is truly awesome, and something I aspire to.
The third and final thing that I would hope for in my dotage is love. With love comes laughter, joy, and hope. Two years ago I met a 96 year-old woman named Ruth at an upscale nursing home. She wore brilliantly multi-colored glasses complimented by a sassy chin-length bob. She was thin but not frail, and had a certain understated elegance in the way she held herself.
As I sat down at the table across from her, she promptly introduced herself. “Well, hi honey, I’m Ruth. How are you today?” She spoke loud and clear, with a pronounced southern accent and a broad grin on her face.
I found that I was already mirroring her grin. “I’m doing great, how are you?”
We went on to have a lovely conversation, in which I learned she lived alone, but was at the facility for a few weeks recovering from surgery. I also discovered that her husband had died within the last few years, and she had lived in Louisville her entire life.
She was vibrant, and beautiful, and compelling, and I wished I could spend more time in her company. Shortly before I was to leave, she asked about my husband (she got an earful of my happiness) and whether I had children. I told her I did not, a little reluctantly since people of her generation are usually dismayed by this fact.
To my surprise, she grinned and patted my hand. “That’s alright, honey. We never had any children either, and I’ve got lots of people in my life that love me.”
I couldn’t help the smile that came to my lips; I had absolutely no doubt that was true.

So there you have it. When I am an old woman, I shall wear electric blue tennis shoes, dance the tango, assist young woman with their bags, read as many large-print books as I can get my hands on, wear loud, multi-colored glasses and call everyone honey. I shall love, I shall laugh, and I shall dance :)

What will you wear when you are an old woman/man? Who would you like to be like?

In honor of the resourcefulness of British housewives (who turned to carrot cake during the sugar shortages of WWII) of the same ilk as our rescuer, I am providing you with the world's best carrot cake, slightly modified from the recipe found here.

Preheat oven to 350 degrees
Grease and flour either a 9x13 pan or three 9-in cake pans
In a large bowl, combine dry ingredients and mix (carrots, sugar, flour, baking soda and powder, salt, cinnamon. Stir in eggs, oil, vanilla, pineapple, and nuts, and mixed until combined.
Bake 23 to 28 minutes (9-in pans) or 30 to 40 minutes (9x13), or until center comes out clean